PP: «Another one from Chulvi»

The Popular Party of Xàbia responds to the opinions of the mayor, José Chulvi, on the Arenal floods.

"There are already too many times, many beautiful words and few facts, and when the hand is extended and the right initiative is from the Popular Party, which is already a few, it despises it with the only way out, which no longer works, you blame it distant government of the PP.

This is the mayor that Xàbia has. A mayor who apologizes for not having done important duties for all the residents of the town for 9 years. He only knows how to limit himself to blaming an urban project that was carried out while the PP governed, but it is curious that he does not remember that the PSOE was governed in 1990 when the General Plan that gave legality to that urban land in Arenal was approved.

You cannot live your entire life blaming others for your poor management. Right now the excuses are running out. Is it true or not, Mr. Mayor, that since the beginning of this legislature the Popular people have extended their hand to participate and work together? Is it true or not that after DANA Gloria the popular
did they file a motion to take preventive measures to avoid damage due to storms with concrete actions? 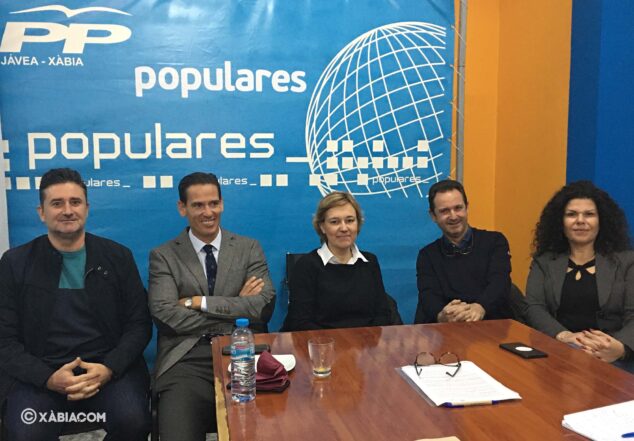 Councilors of the PP

So why do you accuse the PP of doing demagogy, for regretting that once again you have not done your homework, or for communicating to the population that if you had listened to the popular right now, the Arenal area would not be flooded.

It is not demagoguery, that is to say the TRUTH. In politics you are to work, solve problems and improve the lives of citizens. And not to always be looking back and saying that the problems are the fault of others when the only one who is to blame for the problem is not solved is yours.

In the motion presented by the Popular Party, it was proposed to take preventive measures that would avoid damage in future storms, the adaptation of the last section of the highway of the Pla Highway has been proposed to guarantee pedestrian safety.

In the sports area of ​​Jávea-Park, it was proposed to enable and have a continuous maintenance of the area and has insisted on maintaining the gardening, cleaning, the lack of police ... ... and the response that has always been received is more typical of a government that would be more comfortable in the opposition attacking the rest of
parties, that of a decisive government and execution of projects that give a better quality of life to its citizens.

It is our duty as the opposition to demand a solution for the Arenal, there are too many years of flooding and the only action that has been taken to solve the problem of drainage began with the installation of the collectors of Avinguda Tamarits by the government of the Popular Party and it culminated in the government of Monfort. The rest of the governments has never had the detail to maintain or expand them and take care of Arenal as it deserves.

In the almost 2 years of legislature or in the 9 years of the socialist government, nothing has been done to solve this problem, but to get out of trouble the Mayor finds it justified to go back 15 years ago because he governed the PP, then go ahead, but It must be traced to do it correctly and to report that the land of Arenal 3 and 3 A is urban land, which was declared by an expansionist General Plan approved in 1990 by the PSOE and that like any urban land, its owners have the right to develop it urbanistically, in the same way that it is being built throughout the Cape San Antonio, or in the same way that the license of the Restaurant of the 2nd Montañar has been granted, or is it that this has been able to prohibit it?

If they did not really want that soil to be developed, they had time to declassify and compensate it and they did not.

The General Plan is the normative instrument that allows and authorizes the development of the Arenal execution units, the It montgó or Portitxol. Whether we like this General Plan or not, the person who wrote it decided so and authorized it to be developed in Arenal 3 and 3 A.

It is curious that in those days they did nothing to declassify Arenal, because for this urban process the Chulvi government does know how to do it, and the most recent case is in Granadella, a land that is classified as Non-Developable Land of Special Protection, but surprisingly, the General Structural Plan that is now being drafted by the municipal government of the PSOE is going to declassify a specific part to turn it into urban land, and that, it seems, is not serious and for that they keep silence. What was that of Xàbia Verda like?

This is the government of Xàbia. A government to which constructive and positive proposals cannot be made, because it does not accept them either full after full, or because it is a demand from residents and businessmen from year to year. What is happening to us is that too much time has passed, we are promised only when authorities come to visit our disasters, but no one here has seen anything. Today is the Arenal, but the Urban Center is the same, we can have 80 projects but if we do not prioritize the needs of Xàbia, we all lose ".