Cabo San Antonio Jávea: how to get there, what to see and the best photos

El Cap de Sant Antoni It is an emblematic cape, located between the municipalities of Xàbia and Dénia. It is one of the easternmost points of the province of Alicante (surpassed by Cabo de la Nao or Cap de la Nau in Valencian), and therefore, from the Iberian Peninsula. It occupies an area of ​​about 110 hectares, and its cliffs rise more than 150 meters above sea level. At its feet is the Cabo de San Antonio Marine Reserve and it is also home to important flora micro-reserves. In addition, it is a place to take beautiful photographs. 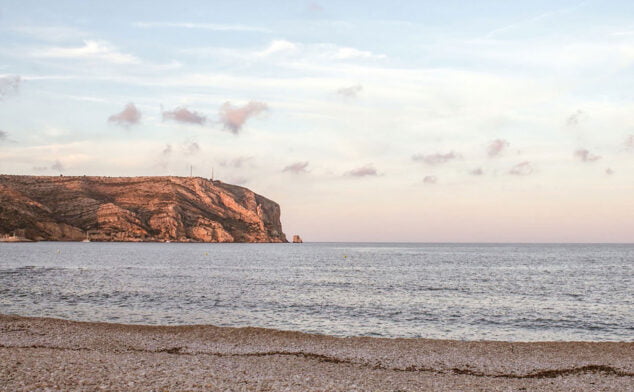 Because it is important

In Cap de Sant Antoni, end of the Natural Park Montgó, there are two vegetable microreserves, one on the north cliff and the other on theIllot de la Mona (Islote de la Mona), at the foot of the cape. In addition, it is a place for whale watching and it is also a marine reserve.

What is a flora microreserve? The following information is extracted from the panels installed on the rope itself:

The objective of the network of flora micro-reserves of the Valencian Community is to include, in plots of up to 20 hectares, a representation of rare, endemic or threatened flora. It is the only legal figure in the European Union dedicated to the conservation of flora. In them, research and vegetation management are carried out (alien species are eliminated, selective clearing and felling are carried out, seeds are collected to conserve them in a germplasm bank and for nursery production), censuses, inventories are also carried out. and habitat mapping. 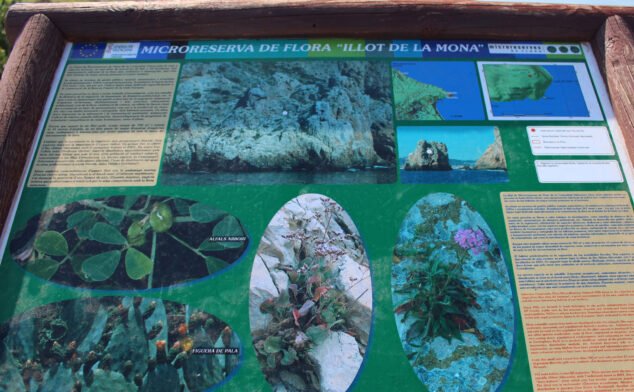 L'Illot de la Mona It is a small islet that occupies less than 700 m2 and only reaches 15 meters in height, but it is one of the points with the highest density of rare and endemic species in the entire network of micro-reserves. Three species mark the importance of the islet: the Silene de Ifach (sylene ifacensis), marine alfalfa (Medicago citrine), which only has another population in the Columbretes Islands, and the saladilla (Limonium scopulorum), which is located between the Dénia coastline and Poble Nou de Benitatxell.

Unfortunately, in 2014 a fire devastated much of the cape, now recovered.

Again, we extract information from the panels installed in the vicinity of the cape: 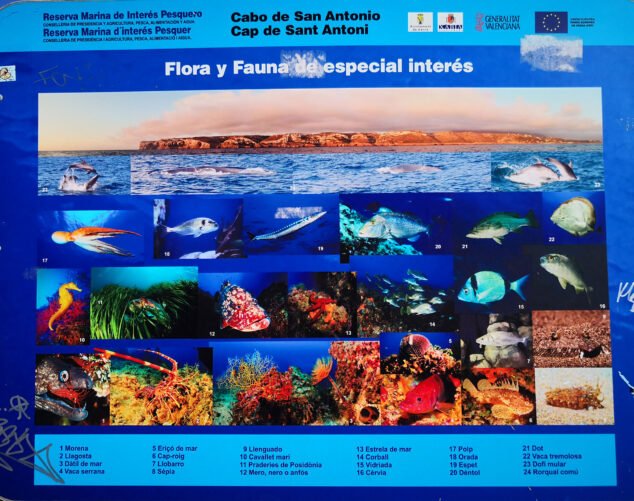 Far from being just a "nuisance" for bathers on the beaches, the oceanic posidonia has a very important role in nature and it is necessary to claim it: it is responsible for one of the most important underwater ecosystems and its presence indicates good health in the waters. Posidonia meadows are home to a multitude of species that serve as food, shelter and laying place.

The laws that regulate the marine reserve are:

The reserve zone includes the inland waters between the easternmost point of Cabo de San Antonio and the meridian of 00º 08,10 'E.

What species are protected

The main species that are preserved are:

In the Middle Ages, the Hieronymite monks settled in isolated parts of the world, in search of solitude and tranquility to meet God. Around 1340, there was a movement in which numerous groups became hermits and dispersed through the kingdoms of Castile and Aragon in search of caves, mountains and other remote places. Here in Xàbia, twelve faithful withdrew to the calls holy caves (holy caves), under the Cape of San Antonio.

Sister Catalina Bas, a nun from Xàbia, also retired to a cave. In 1373 according to some sources, in 1376 according to others, the Bishop of València, Jaime de Aragón, granted him the privilege of building a hermitage in honor of Saint Anthony.

What to see and what to do

This is an exceptional place for lovers of nature, photography and to enjoy wonderful views.

A little before reaching the end of the cape, we found a gazebo from which you can see the entire bay of Jávea.

In the highest part is the Lighthouse (first lit 1855). At the moment it cannot be visited, but in the near future it will be an interpretation center for the Marine Reserve and the Montgó Natural Park. 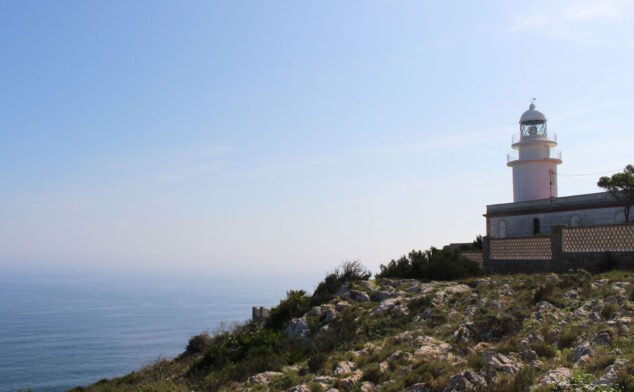 This route is classified as low difficulty, it is very affordable and allows you to come into direct contact with nature and the landscape. These are the details of the itinerary from the cape to the port. 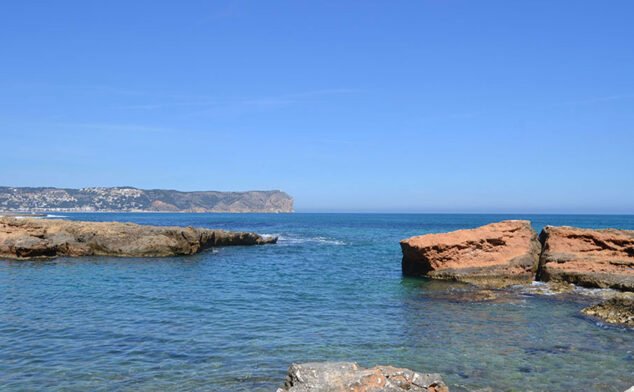 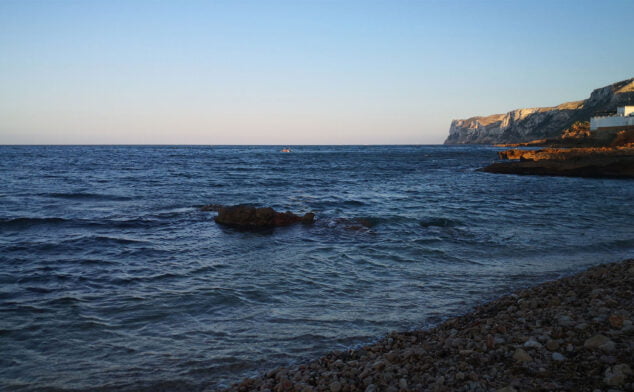 Sunset from Les Rotes in Dénia, with Cabo de San Antonio in the background 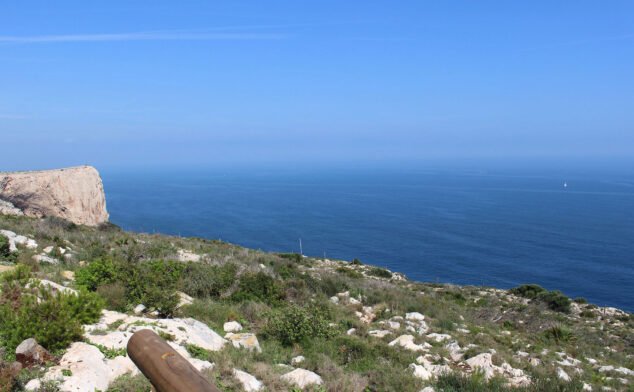 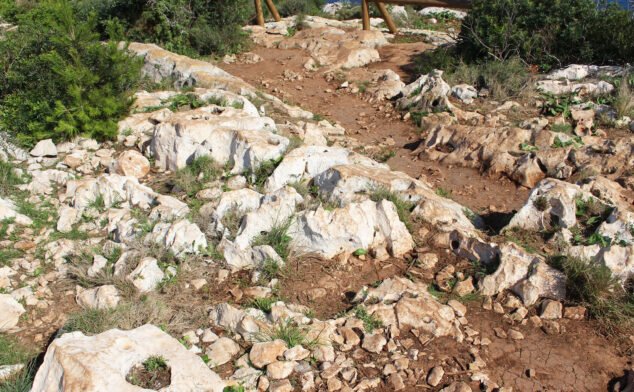 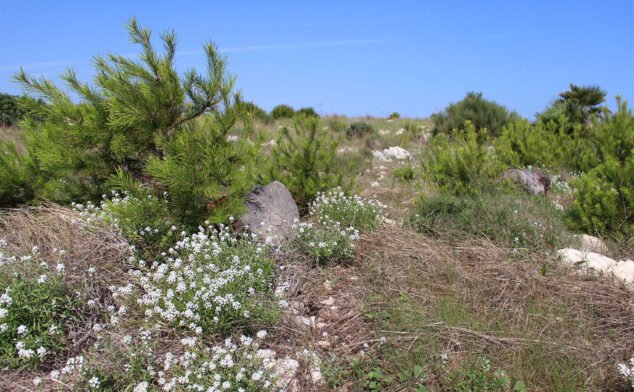 Flora of the Cape of San Antonio de Jávea 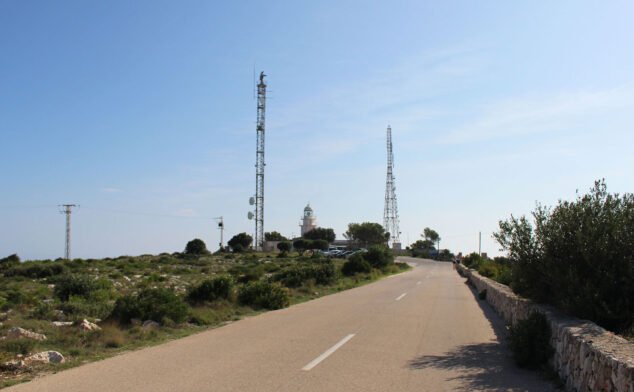 Arrival road to Cap de Sant Antoni de Xàbia, with the lighthouse in the background 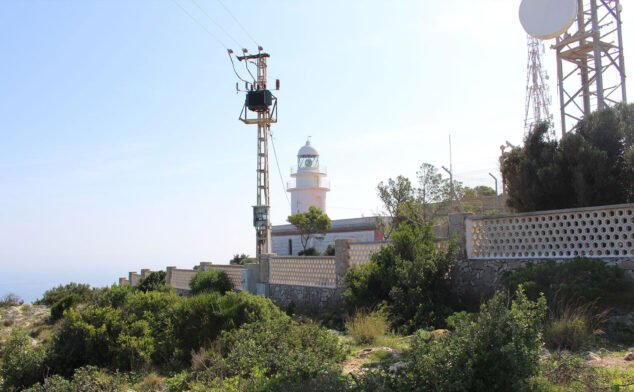 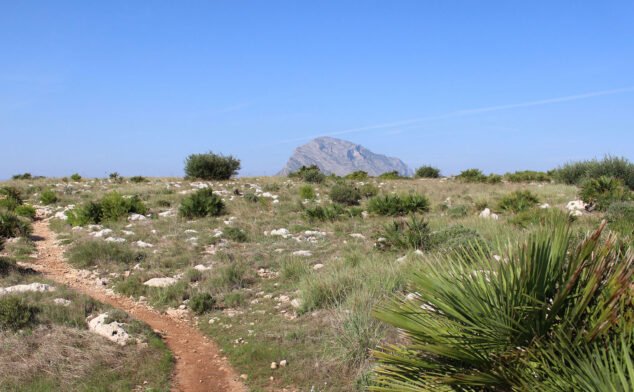 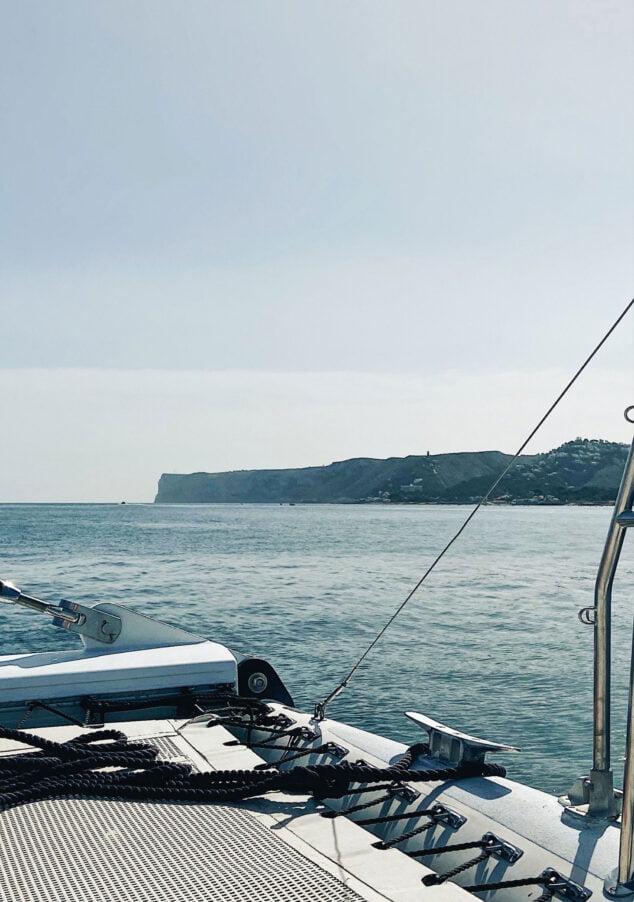 The Cape of San Antonio seen from the sea, in front of Les Rotes in Dénia 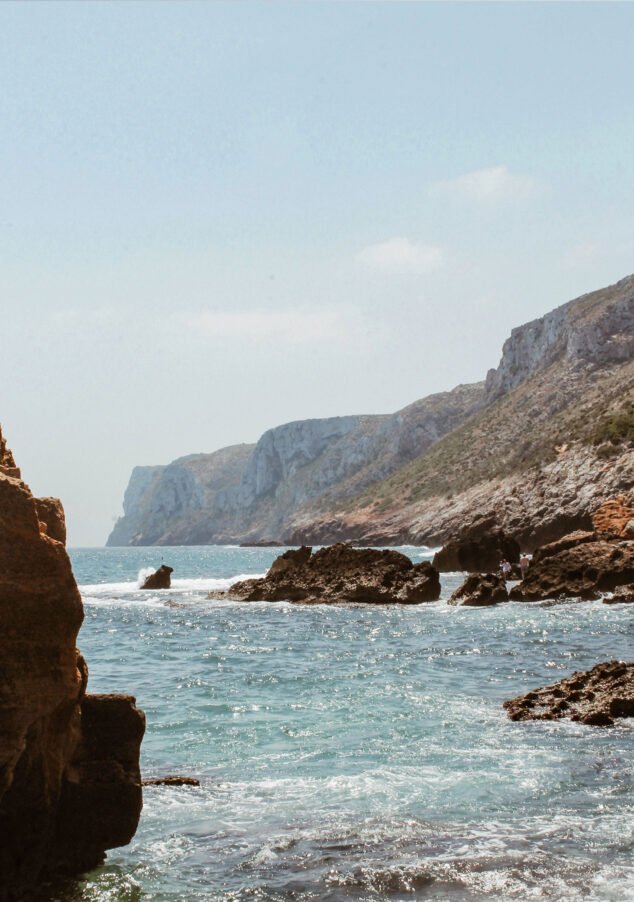 The Cape of San Antonio from the end of Les Rotes, in Dénia 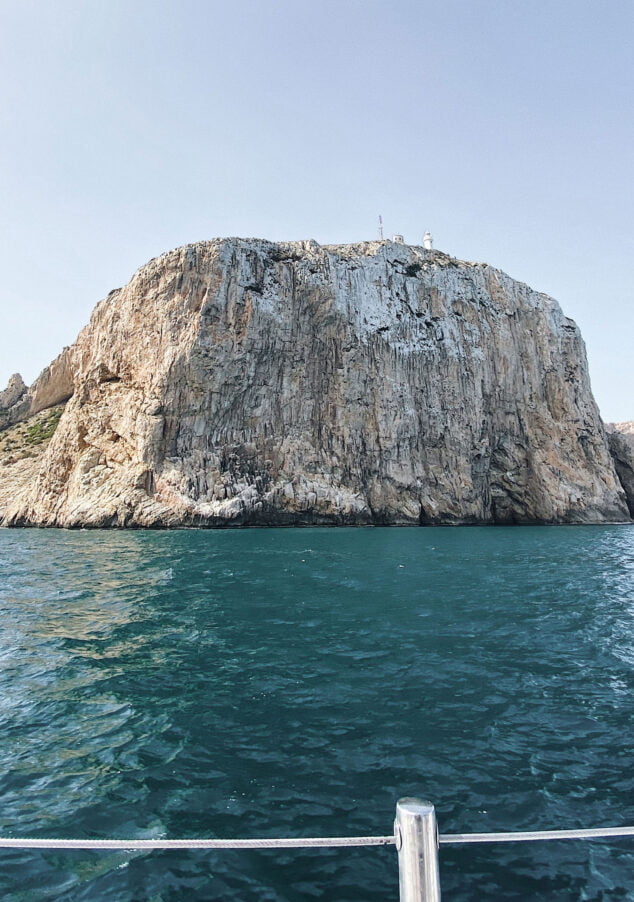 Impressive cliff face of Cabo de San Antonio, with the lighthouse above 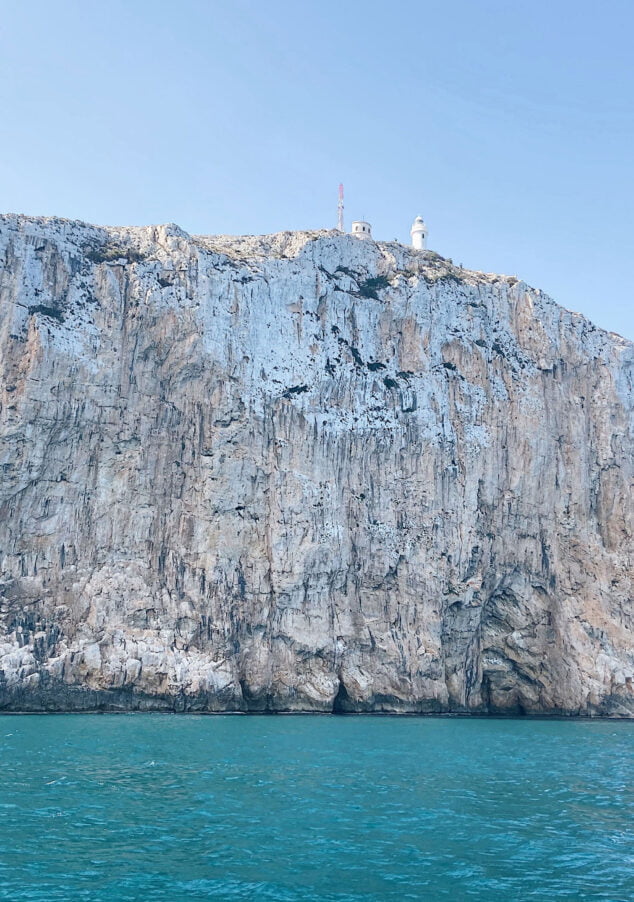 Vertical wall of Cabo de San Antonio from the sea