The Minister of Justice, Public Administration and Interior, Gabriela Bravo, said in the visit to the municipalities affected by the storm Glory what to recover "sooner" the normality in the beaches damaged by the storm and that these are ready for the tourist season.

Bravo has announced that after the urgent approval of the decree of aid that will be carried out this Friday at the Plenary Session of the Consell, the local corporations of the municipalities affected by the storm have 45 days to request the Generalitat the aid to repair the damage caused by bad weather. 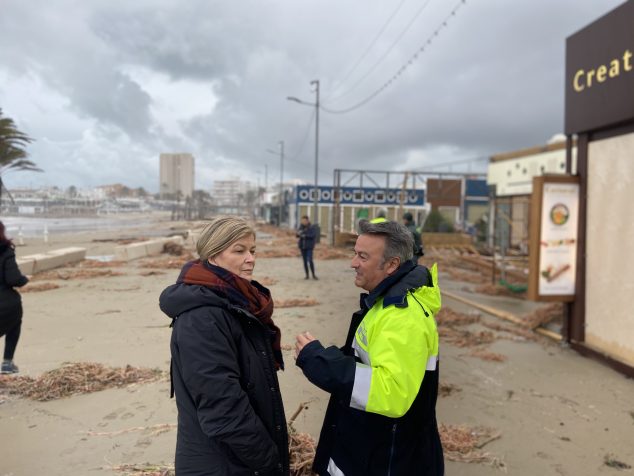 Gabriela Bravo with José Chulvi on the Paseo del Arenal

The Minister has indicated that the intention of the Generalitat "As was done with the DANA episode last September is to act as quickly as possible administrative."

Bravo has said that subsidies can be used to repair infrastructure such as boardwalks and also "Inventoryable goods and especially urban furniture and tourist services of beaches so that normality can be recovered as soon as possible in our coasts" and that everything is ready when the tourist season begins.

In addition, the Minister has assured that the Valencian Agency of Security and Emergencies "I was ready" to address this emergency since "In the Generalitat we are very aware that, due to the climate crisis, the storms will be increasingly virulent and will occur more frequently."

The Valencian Consell meets in Xàbia
07 of February 2020