The Civil Guard has arrested two men, as alleged perpetrators of a crime of kidnapping, two robberies with violence and intimidation and a crime of serious injury. 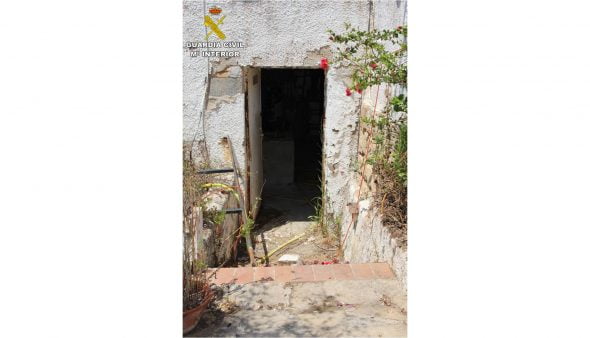 Last July 26 of 2019, two individuals kidnapped one of 61 years under threat in Xàbia, holding him inside an unknown house for about 12 hours.

During the time that the kidnapping lasted, the authors beat this man incessantly, causing numerous bruises and bruises of serious consideration, the fracture of the fibula of the left leg and burns with an iron in the back. When they left, they took 16.000 € in cash and the vehicle owned by the victim.

Before this event, the agents of the Judicial Police Team of the Civil Guard of Xàbia began an investigation, centered in its initial phase in finding out the exact place where the events had occurred, in case either of the two authors returned to it.

In spite of the few indications that the victim could provide to the agents, the house was located in a semi-abandoned farm, on the outskirts of the town of Jávea. All around, an important surveillance device was established, culminating in the arrest of the main suspect.
Inside the house they found different effects from other robberies with violence and intimidation, such as 3 ordinaries valued at 23.000 €, a vehicle, 700 € in cash, 2 televisions valued at 800 € and a video console valued at 300 €.

After this first detention, there was still that of the second, which has remained unknown, until last week in which, thanks to obtaining different information, it was possible to be located in the province of Madrid, specifically in the prison in Madrid V , in which he was serving a sentence for several judicial requisitions for events similar to those investigated.

The agents waited for his transfer to the prison in Alicante II to go there and charge him with the same crimes as his partner.

Finally, the judicial authority has decreed the entry / stay in prison of these two men detained as alleged perpetrators of the crimes of kidnapping, serious injuries and robbery with violence and intimidation.

The sea invades the coast of Xàbia
20 January 2020