The Grup de Danses Portitxol continues to maintain the typical Valencian values ​​through dance and for this, once again, organizes the traditional Corpus Christi dances that cross the streets of the historic center of Xàbia.

In this edition, which is already the 22ª, two acts have been scheduled. The first one will be Crida, which will take place on 16 Sunday in June at 19 hours. This act is about a tour of the Bestiari Festiu Valencià (Name that receives the set of figures that represent real or fantastic animals that are exhibited in Valencian local festivals and have their origin in the medieval theater of the processions of Corpus Christi), which represents the announcement of the Feast of Corpus Christi. 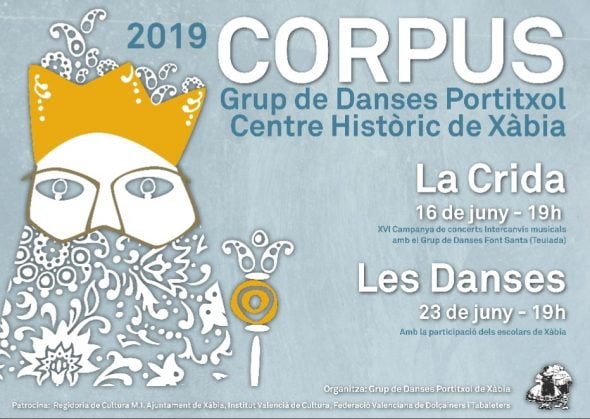 This performance of Sunday 16 is included within the XVI Exchange Concert Campaign in which the Danses de Teulada group participates.

The second act will be held on 23 Sunday in June at 19 hours. The traditional Danses del Corpus they will open the way to the Corpus Christi procession. Traditional Valencian dances that will be performed by the children of the schools of Xàbia.