One of the changes brought about by the new contract for the waste collection and street cleaning service is related to the green points. The growing uncivil use of these spaces, which daily suffer from spills outside the containers and where belongings, furniture or materials are abandoned instead of being taken to the ecopark, has led to rethinking the management system and for this reason its enclosure is included in this contract. 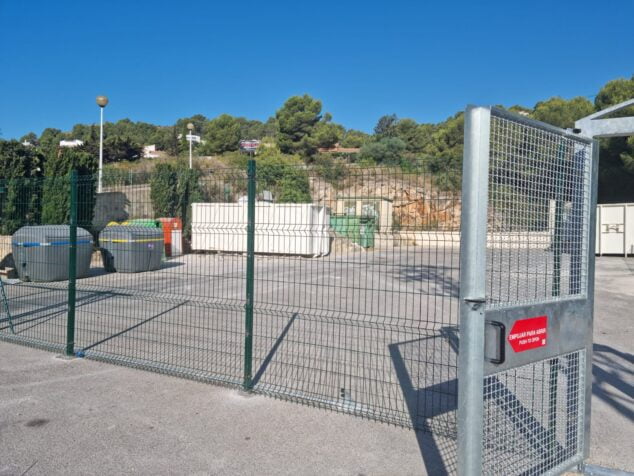 The intention of the Department of Services is that they can only be used by residents of the area, who will be given an identification card that will allow them to open the fence. In addition, the site will have video surveillance to control possible misuse or spills and to be able to sanction them.

The councilor, Kika Mata, explained that the change will not be immediate but for the time being the fence has begun to be installed at some of the points such as Rafalet or Cansalades. In the coming months, the transition will be completed with the security system and residents will be contacted to manage the distribution of accreditations by address.

Entrance to the green point allowed only to residents

Mata has taken the opportunity to ask for citizen awareness on the issue of waste since the municipality dedicates a lot of means to its maintenance and even then it does not manage to keep a decent public image. The mayor has ensured that all green points are cleaned daily first thing in the morning and in a few hours their appearance is disastrous again.

Mata pointed out that behind this situation, in addition to uncivil citizen behavior, is the general change that is taking place in the waste sector at an industrial level. There are many companies that see how managers have tightened the conditions to accept them and require them to classify and separate them depending on their dangerousness and characteristics.

This has made illegal dumping proliferate not only in Xàbia, but at a general level. In fact, the mayor points out, many of the cases that are being sanctioned are like this; companies (many of them not even from the municipality) that are dedicated to removals or cleaning, gardening or construction and leave bags with rubble, belongings or green industrial waste at the green points.

In view of this, remember that the Green Points are municipal facilities to facilitate the selective collection of urban waste of domestic origin, especially in the scattered, and that in no case is its use allowed to professionals who carry out a lucrative activity and much less generated in other municipalities. (the penalties are up to 750 euros).

The waste that can be deposited at the Punts Verds is the organic fraction, light packaging, paper and cardboard, glass, vegetable oil, clothing and footwear, and domestic garden waste. The rest must be taken to the Ecoparque (on the Camí de Les Sorts).