Saturday December 13, Xàbia will pay homage to the patron saint of sight, Saint Lucia and artillery, Santa Barbara. The arrival of the last month of the year not only means, in the town, the celebration of Christmas. Santa Lucia and Santa Barbara have their day stage in a day of living, devotion and fraternal spirit whose central act the pilgrimage to the highest chapel in the municipality.

Will take place tomorrow Friday Crida of Festa, Act with which the festeros call the neighbors to share her joy on the eve of the celebration. Accompanied by romantic Saladar, the overseers of this year will come in handing out donuts and sweet wine parade through the streets of the Historic Center up the street from St. Lucia. There they ofrendarán a bouquet of flowers to the saint in its niche and trigger an traca. 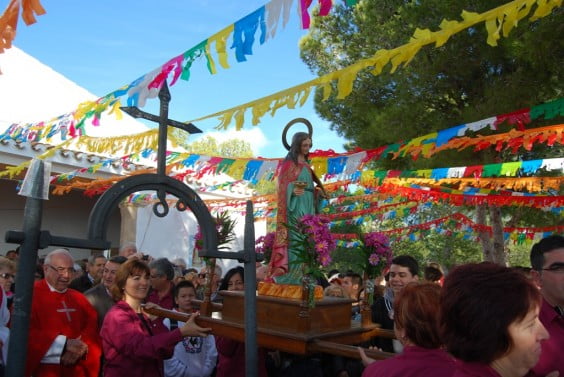 Saturday, very early, the old town wake to the sound of music and gunpowder. At 8h will be a despertà which will be accompanied by the Xirimitabs colla. At 10h, municipal authorities, religious brotherhood of St. Lucia and neighbors who wish to attend will come on pilgrimage from the parish of St. Bartholomew to the chapel of Santa Lucia. It is scheduled after the celebration of a Mass that will end with the procession around the shrine, the two saints. Subsequently, the festive chocolate and sweets invite all attendees.

As the holiday coincides on Saturday, and does not fall during the week, a greater influx of people is expected compared to other years.