This week the 2019-2020 Children's Council of El Poble Nou de Benitatxell was established. A collective that gives voice to children and that recently had no representation. On this occasion, six boys and girls of 5º of Primary are the new additions to the council.

The new members have taken the presidential chairs of the plenary with their fellow veterans, forming a group of 17 advisors. The mayor, Miguel Ángel García, and the Councilor for Education and Children, Jorge Pascual, presented a diploma to the new members and entrusted them with the great task of "Represent all the children of the municipality". 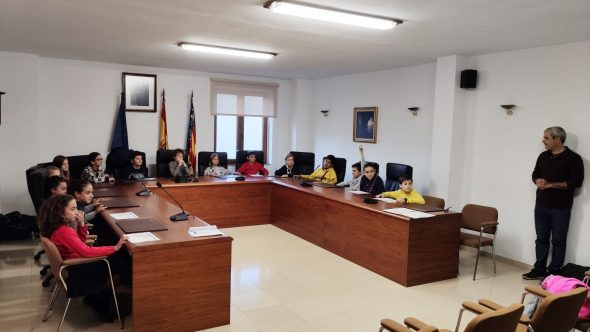 During this course, the boys and girls will have the task of giving voice to all their classmates and proposing projects and measures that improve the day to day not only of the little ones, but also of their elders. Because, as highlighted by the mayor of Education, "They do not look only for them, but also for adults, since many of the proposals that were put forward to us a few months ago took into account the people who live with them, who surround them."

The children showed a positive attitude and eagerness to work. They were interested in the requests that, through a kind of electoral program, were transferred last June to the municipal government. Among them, they highlighted the request of a history museum, a House of Culture, a driving school, a hamburger shop, that the parks be intergenerational spaces, that biosaludable areas are created for older people and that the entire population, and not only Children, enjoy these green areas of leisure and living together.

They also requested to improve the sports facilities, to build a pavilion, to take better advantage of the Santa María Magdalena public school playground, to place permanent nets in the goals and baskets and
improve the 'skateparks'.

Jorge Pascual advanced that during the last months all the proposals have been studied and that at the next Council meeting, which will be held next Monday, December 16, he will meet with them to explain what will be carried out, what will be done is shuffling and what can not be done because it escapes the powers of the City Council.

Finally, the mayor stressed the importance of the council. “It provides a vision of childhood of many aspects with which they live together that adults do not get to see. The places where they play, where they spend their day to day, their free time and everything they use we often do not know. What better for them to transfer their needs ”concluded Garcia.