The sailors of the Optimist A class of the Yacht Club of Jávea participated in a prestigious clinic that was held on Lake Garda in northern Italy.

The young people, Lucy Crosbie, Arantza Reig, Joel Ferrer, Álvaro Vallés, Kevin Lenis and Jorge Momparler, along with their coach, Julián Viciano, joined a large number of young people led by Ricky and Sven Stadel, who are considered the best Coaches of this category.

As Viciano explained, the sailors of the CN Jávea “They have made marathon training days” that have lasted from the 8 in the morning to the 17 in the afternoon, with a single break of 30 minutes to eat. Viciano has valued the efforts of the five sailors as well as their families and the club itself “To be able to participate in this important event”. 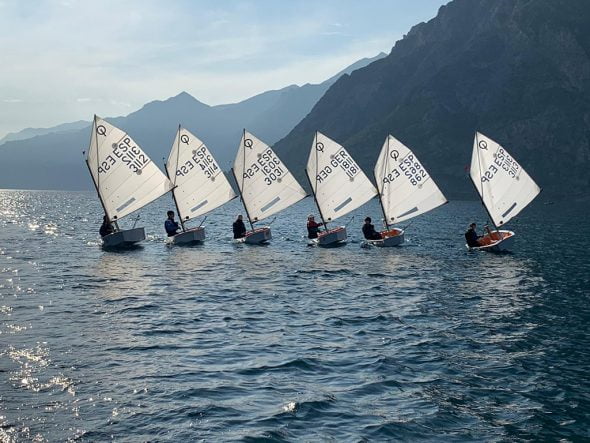 Also, the coach stressed that with this preparation Lucy, Arantza, Joel, Álvaro, Kevin, Lenis and Jorge acquire knowledge of navigation in other types of waters, such as Lake Garda, where a large number of calendar events are held international optimist.

Viciano pointed out that, “The knowledge acquired may test them throughout the Autonomous Optimist season”, in which the club aspires to return to be among the best in the Community.

Joel Ferrer stays in Garda to play the Halloween Cup

In addition, Joel Ferrer one of the sailors who have participated in this clinic will stay a few more days in Garda since he is enrolled in the 7 edition of the Hallowen Optimist Cup organized by the Vela Garda Circolo from 1 to November 3.

Ferrer is the only Spanish sailor who will contest this event in which young 602 of the optimist class from almost all the countries of Europe are registered.

Sailors from Spain, Germany and France have participated in the CN Jávea Clinic
03 January 2020
Leave a comment