From July 16 to 24, Xàbia will once again surrender to the Moorish hosts and the Christian troops after two years of silence. The music, the parades, the color, the majesty, the entreetes and the remembrance of local history return with a program that includes novelties and that will exalt the figure of the Mora and Cristiana Flag Bearers on the twenty-fifth anniversary of the creation of this position so rooted and important to the party. 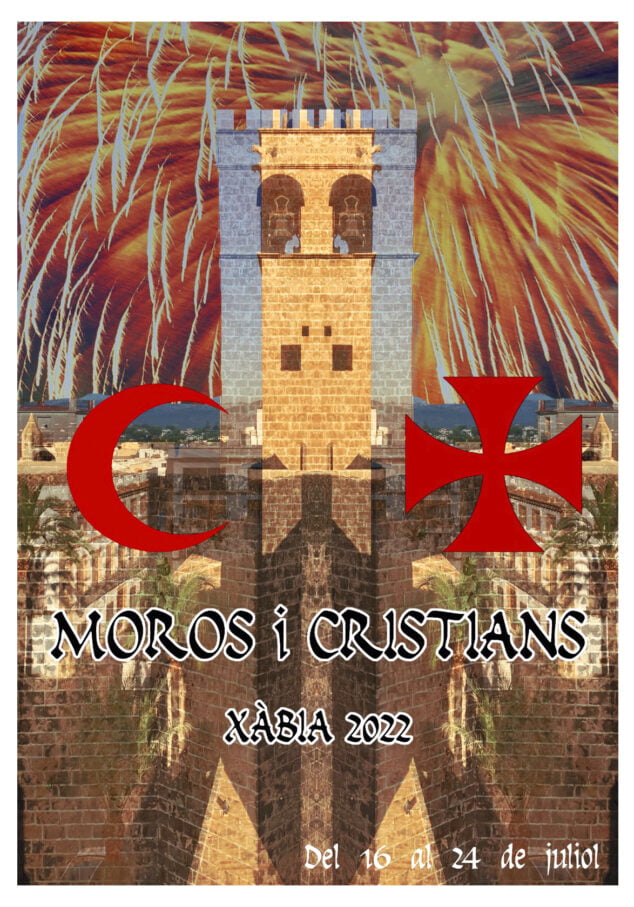 The presentation of the Llibre Fester is the countdown to the start of the big days of celebration. The Moors and Christians festival is an unavoidable summer event that has an outstanding tourist component for the municipality. In a few days, Aduanas del Mar will begin to immerse itself in the festive atmosphere with the raising of banners on the main avenues of the center and on Saturday 16 another edition will begin with an intense program that invites everyone to go out into the street and enjoy for just over a week.

This has been highlighted by Rubén Femenia, president of the Festivities Board, during the presentation of the official publication of the festivities held at the Casa del Pescador and which has brought together a large part of the festive family. During the act, Femenia was accompanied by the Flag Bearers Mora and Cristiana 20-22, Lucía Llidó and Carla Llidó and the Captains of the Filà Ballesters, Florencio Mata and Rosa Catalá. Along with them, the Mayor of Xàbia, José Chulvi and the Councilor for Fiestas, Kika Mata.

Femenia has also influenced the special commemoration that the festival celebrates this year on the twenty-fifth anniversary of the creation of the position of Mora y Cristiana Flag Bearer, Xàbia being one of the first towns to grant a leading role to women, with full autonomy and that does not depend on any other representative position to exercise.

The Llibre Fester reviews the representatives of the history of both sides. Likewise, all of them have been invited to participate in a tribute that will take place in the Presentation on Saturday 16 and in the Offering of Flowers to Sant Jaume on Wednesday 20. The same Presentation will be conducted by the last two Flag Bearers of the festivities and in it The Minister of Science and Innovation, Diana Morant, who has accepted without hesitation the proposal of the Board of Festes will act as herald.

Other novelties in the program is a greater presence of music and night performances of all kinds. Also, the celebration of a paella contest between rows on the night of Wednesday 20, a greater enhancement of the Band Tickets and an outstanding role of gunpowder practically every day of the celebration.

The Festive Music Concert of the Xàbia Artistic Musical Center will take place on Sunday 17 and will serve for the premiere of several new compositions that are added to the wide existing repertoire of festive music. On Monday the 18th and Tuesday the 19th, the usual visits to the El Arenal and the Historic Center will take place, with the traditional offering of flowers in the niche of Sant Jaume taking place in the latter. As is customary, during the offering on the 20th, the filaes will demonstrate their solidarity by carrying an offering of food for the benefit of Cáritas Parroquial. In addition, during the act, the filaes will accompany the image of Sant Jaume so that it remains inside the parish on the main days of festivities.

On Thursday the 21st and Friday the 22nd, the acts of historical re-enactment will be held with the Landing, Moorish Embassy and Christian Surrender (on Thursday) and the Christian Battle and Reconquest (Friday). On the weekend (23rd and 24th), the attention will focus on the Music Band Tickets and the Gala Parades in which each filà will show its best clothes. On Sunday, in addition, children's activities will take place in the morning and, prior to the parade, the XVII Trobada de Bandas de Música will perform the Xàbia pasodoble in unison. As a climax, the Filà Capitana Ballesters will display its spectacular pageantry that she has prepared with so much effort and kept secret throughout all this time. As the end of the party, a nocturnal mascletà will be shot from the Grava beach.

Coinciding with the celebration of Sant Jaume's day on Monday 25, els Moros i Cristians They will celebrate that day the Eucharist in memory of the deceased festeros and festeros and will accompany the image of the patron saint back to his usual place of permanence in the Asilo-Residencia Hermanos Cholbi.

The Llibre Fester also makes a written acknowledgment to the festeros awarded the Premi Sant Jaume 2022 that aims to value the work carried out by outstanding components of the party who have worked hard to enhance it.

In this edition, the Festival Board will recognize, in the Presentation on the 16th, the work of Juan Cardona Bisquert (of the filà Al-Tarik's) as one of the active veterans with the greatest background and curriculum today, that of José García Cardona (Pepe “El Rubio” or “Xiulit”) as the unforgettable Moorish Ambassador and endearing party-goer and that of Encarna Tachó, always predisposed party-goer who embroidered the banners of up to five rows and the two of the Fogueres festivity. These last two prizes will be awarded posthumously.

A spectacular and colorful gala parade puts an end to the Moors and Christians festivities of Xàbia 2022
July 25, 2022

The Moors and Christians of Xàbia offer to Sant Jaume
July 21, 2022
Comments

28.803
1.999
9.382
791
We use cookies necessary for navigation and traffic analysis. We do not use cookies that provide us with personal data or advertising cookies.
More optionsACCEPT
Manage consents