Ferrocarrils de la Generalitat Valenciana (FGV) has started the bidding process for the renovation project and infrastructure conditioning of the 9 Line (Benidorm-Dénia) in the section between the Teulada and Gata de Gorgos stations.

The project has an initial tender budget of 18.031.126,08 euros, VAT included, and an execution period of 12 months. This section has about six kilometers of travel.

On the other hand, it is pending to be awarded in a short term the renewal of the track between Gata de Gorgos and Dénia, with an investment of 18.827.950, 79 euros and an initial intervention period of 11,5 months. 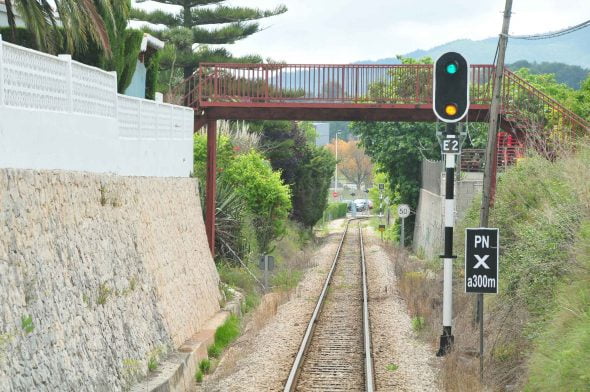 Tenders for TRAM works for the Teulada-Gata de Gorgos section

The renewal of the track of these two sections will allow the completion of the renovation work planned in the entire 9 Line. This action is part of the different interventions that the Generalitat is carrying out, through FGV, in the Benidorm-Dénia connection, with the aim of maintaining and improving the operating conditions, guaranteeing the regularity and quality of the service, with standards similar to the rest of the FGV network in Alicante.

Among the actions already underway or in administrative processing and those planned for the coming years, the Generalitat's investment in the 9 Line of the TRAM d'Alacant amounts to more than 130 million euros.

These actions allow to improve the safety conditions, favor the user's comfort, the durability of the road and the reduction of maintenance. In addition, the planned work includes the installation of the new signaling and communications systems.

The intervention in the section Teulada-Gata de Gorgos undertakes an integral renovation of this section of the 9 Line, as well as that between Gata de Gorgos and Dénia. The state of a good part of the infrastructure of this section, especially embankments, drainage and the slopes require consolidation actions. Also, the track superstructure needs a renewal of rail, crossbar and ballast.

On the other hand, FGV has already awarded the acquisition of the supply of sleepers and rails for the renovation of these two sections. The public company has thus made the purchase of 19.000 cross ties of metric monobloc concrete widths in the amount of 1.643.785 euros, VAT included, and 30.600 linear meters of rail, with a cost of 1.443.572,77 euros, also with the aforementioned tax included.

Compromís elevates to the Senate the state of the cove and chalet of the Minister of Xàbia
August 03st, 2020

The Xàbia City Council cancels, this year, the 25th edition of the 9 d'October awards
17 de julio de 2020
Leave your comments