The sailor of Club Náutico Jávea Elena Pérez-Manglano has achieved, together with one of the teams of the Valencian Sailing Federation, the Optimist Spanish Championship for teams held in Puerto Sherry in Cádiz.

The Valencian Federation summoned 8 sailors from the Optimist fleet of the entire Community, four of them are part of the Club Náutico Jávea fleet. Begoña Pérez Manglano, Nando Puig, Carlota Gómez and Elena Pérez-Manglano, also called Fernando Puig as coach. 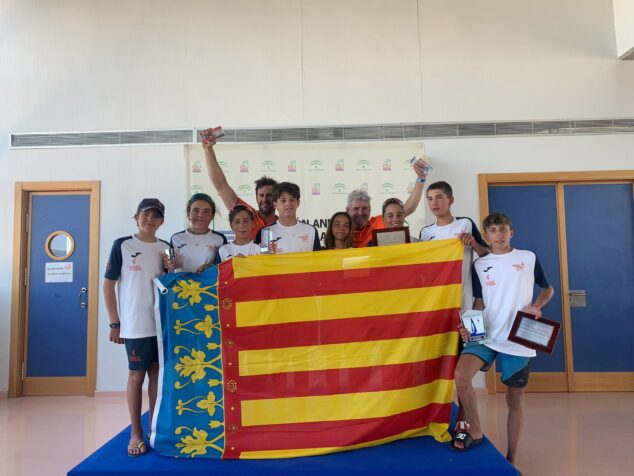 Two teams of Valencian sailors were formed, in such a way that Begoña, Nando and Carlota made up one with Carlos Espi (Real Club Náutico de Valencia) and Elena was integrated into the other, with two more sailors from the Náutico de
Valencia and another from Santa Pola.

The two teams went on to the final and after the tests this Friday, Elena Pérez-Manglano's team managed to be the best, while the team made up of Nando, Begoña, Carlota and Carlos were the third best.

With this victory in the Spanish Championship, the optimist fleet of the Club Náutico Jávea culminates a successful season, after achieving the regional championship barely a month ago.

In addition, the victory of Elena Pérez-Manglano will allow her to participate on behalf of Spain in the Optimist European Championship for teams that will be held at Lago di Ledro, which is located in the north of Italy, in the Trento region, which borders with Austria, at the end of August.