The Civil Guard dismantles a criminal family of the Marina Alta

The Civil Guard has arrested four people in Els Poblets for being the alleged perpetrators of a crime against public health (drug trafficking). The main detainee, and ringleader of the criminal group, was known nearby as "the grandfather of coca", due to his age. 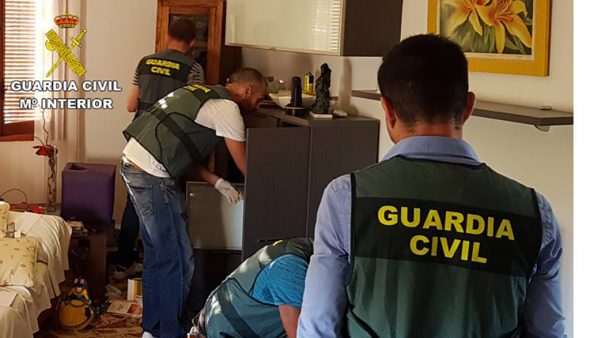 At the end of last year 2018, the Civil Guard of El Vergel became aware of the possible commission of a drug trafficking crime by a neighbor of Els Poblets.

The agents of the ROCA Team of the Calpe Company and members of the Civil Guard Investigation Area of ​​said locality of El Vergel, took charge of the investigation proceedings.

After the first steps, the agents observed how the detainee had formed, together with his wife, his daughter and his son-in-law, a fully organized and coordinated criminal group, their usual places of action and distribution of narcotic substances being the localities of Els Poblets and El Vergel.

This person had a wide portfolio of client-consumers, of all ages (more than one hundred people) who, practically every day, stayed with him to buy some dose of cocaine.

The investigated, nicknamed by its buyers as "the grandfather of coca", he frequented the bars of these two municipalities, using the establishments themselves as a meeting place with their clients, carrying out the drug passes there, with total impunity.

Other times, he used his own home, located on the outskirts of Els Poblets, being habitual to observe a round trip of vehicles in the area or, even also, he was cited in the parking lots of the different supermarkets nearby.

He also used his wife, daughter and son-in-law to carry out drug passes, if he could not do it himself. These last two people were in charge of claiming possible drug debts contracted by customers, something common in this type of "business", for which they did not hesitate to intimidate those who did not pay them, threatening them even with sending them to third parties , who would cause them "significant injuries."

Thanks to the investigation, it has been known that the ringleader of the family criminal group had been profiting from the sale of cocaine for years, which was why he had an established clientele and that, according to his buyers, he believed himself untouchable.

Finally, on August 29, he proceeded to the household search of the family clan, located in Els Poblets, finding both cocaine and marijuana in the house and proceeding to the arrest, in this first phase, of the marriage. In the second phase, carried out on September 15, their daughter and son-in-law were arrested.

The detainees are 4 Spaniards, two men from 61 and 33 years and two women from 55 and 37 years. They have already been made available to the Judicial Authority, who has decreed the entry into provisional prison without bail for the leader of the group, the remaining three detainees being provisionally released.