The Ermita de Santa Lucía y Santa Bárbara crowns the highest point of one of the highest rocks in the municipality. 163 meters above the foot of the It montgó This small chapel is erected -of municipal property- which is included, due to its architectural layout, within the so-called hermitages of conquest (Ermites of conquesta). Although the title of the second holy lose strength at the expense of the first, both give the officer the highest chapel of the town name.

the name 'of conquest' it responds to the moment of construction of the same when the settlers coming from the north, and with great Christian tradition, displaced the Muslim population inland and settled their population in the territory, among other things, building hermitages in the shelter of the Montgó. 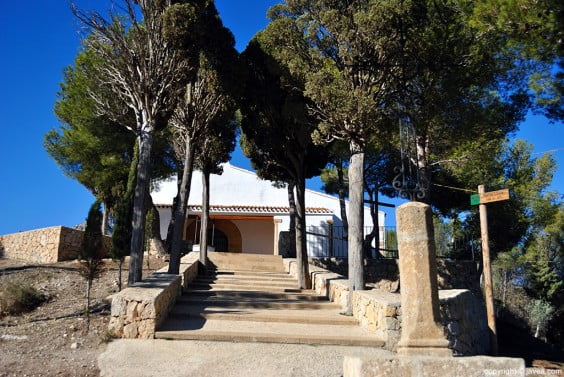 The documentary archives catalog the construction of Saint Lucia in the 17th century. However, the hypothesis that it was built much earlier between the fourteenth and fifteenth centuries due to the historical moment in which it produces the Christian conquest of the territory, the time of settlement and adaptation of the new settlers and the boom period of building of these temples of worship and veneration. The Hermitage of Santa Lucía and Santa Bárbara is the third of the old hermitages existing in Xàbia that remain standing of the four that existed and the only one of them that maintains the cult. Also, in this location, archaeological vestiges of human occupation have been discovered since Prehistory.

The architecture of St. Lucia

The chapel of the protective eye has a simple architecture. It is arranged on a rectangular nave divided into two sections of about 5 meters separated by a large arch slightly pointed rough stone. Its cover features a roof gable. In the far north lies the altar and south, the main entrance is also framed by a robust semicircular arch on voussoirs (blocks, cubes) of rough stone. The building would undergo further modifications as are the side cockpits for hermits place (added in the eighteenth century), the naya with beams covering the main entrance in the style of many of the buildings in the village green or modern placeta and stairway arises at his feet created and reformed in recent years.

The bell that is currently in Santa Lucia is not the original. Although it only resounds once a year - on December 13, the feast of the saint - the original Gothic bell from the XNUMXth century is found in the Archeology and Ethnography Soler Blasco. This change was made in 2004 to preserve its integrity and its conservation.

Part of the grace of this hermitage is its "hard" access, since it can only be done on foot. Yes, it is possible to reach the beginning of the path marked with a vehicle, although it does not have parking and more than three cars cannot park at the foot of the vehicle without impeding the passage or requiring complicated maneuvers to exit.

From this point, the path, steep and sloping; It takes about 10 minutes of travel before reaching the top. On December 13, the day on which Santa Lucía is celebrated, tradition commands to accompany the brotherhood in pilgrimage from the Church of St. Bartholomew, skirting the IES Antoni Llidó and taking the Camí de Santa Llúcia, until reaching the top. A journey of brotherhood that can be done comfortably in three quarters of an hour. 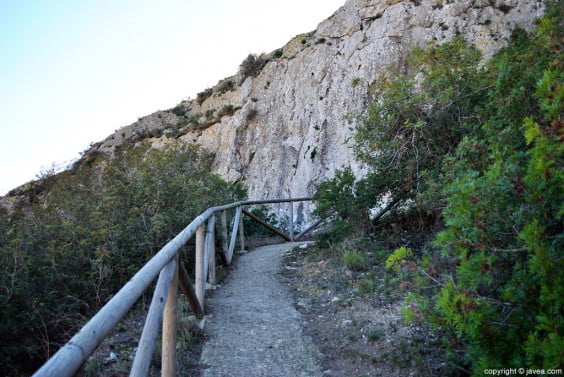 However, except the day of Santa Lucia, is not a busy or crowded chapel the other days of the year so one can venture to approach by car and not have trouble getting in or out. However, for those who do not want to take risks and are willing to walk a path a little longer, the choice is to leave the car in the Plaza of the Constitution and follow the same route of the pilgrimage from there.

The hermitage remains closed all year except the day of its holiday. It is a unique moment because its bell resonates - it sleeps the rest of the year - and its doors open to neighbors and participants in the pilgrimage. In addition, it is the only day of the year in which the images of Saint Lucia and Saint Barbara are in procession around the chapel. That day, how could it be otherwise, a Eucharist is celebrated inside. There is a family that confines the hermitage key throughout the year and is responsible for its interior maintenance. Eucharist inside the Hermitage of Saint Lucia

The biggest party is the December 13 regardless of whether it is a weekend or not. It is not a local party, so shops are open and in schools it is another lesson, in which many students, accompanied by teachers, take the opportunity to socialize and be part of this party.

The celebration of this holiday is carried out by a commission of parties, in which each year it is made up of new members, neighbors of Xàbia who are in charge of preparing the events that comprise this party.

Previously, a week before, a Eucharist is celebrated in honor of Santa Barbara (patron of the artillery) in the Church of San Bartolomé.

The December 12 is held Crida to Festa consisting of a parade through the streets of the Historic Center announcing the proximity of the big day party and inviting all passersby to donuts and sweet wine. The tour ends with the offering of a bouquet of flowers on the shrine of St. Lucia Street.

On December 13, the day starts with a despertà of rockets and dulzainas by the old town. At 10 hours, the municipal authorities, the clergy, the mayoral and mayoral of Santa Lucia, the brotherhood and the neighbors, begin the pilgrimage to the hermitage from the church-fortress of San Bartolomé. Once there, a Eucharist is held in honor of the patrons and, at the end, the two saints make a small procession around the hermitage that culminates with hot chocolate for all attendees, pastries and rocket gunshots. 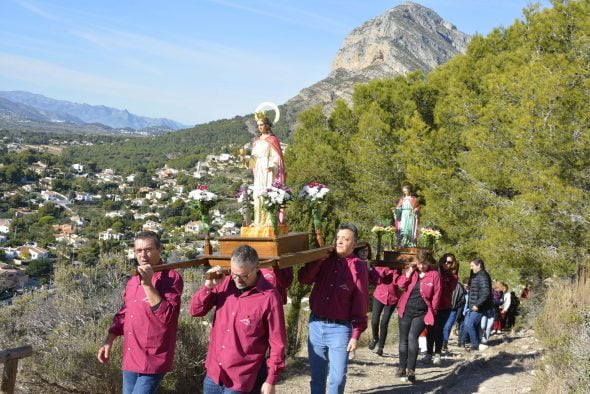 Pilgrimage around the hermitage on the day of the holiday

The situation of the chapel does not allow the existence of restaurants, shops or other shops. The closest are in the Plaza de la Constitución and the adjoining streets.

Of course, the greatest gift of the hermitage enclave is its panoramic view and the tranquility that is breathed there. From its square you can see the Cape San Antonio and the urban nucleus of Aduanas del Mar, as well as the immense Mediterranean Sea in which it is allowed, on clear days, to distinguish the island of Ibiza. At the foot, the town, the Historic Center and the closest neighborhoods crowned by San Bartolomé and Calvario. And in the distance, the third population center, the Arenal. To the west and northwest, the valley that embraces much of La Marina and of course, the impressive Montgó in a unique view of the great watchman. 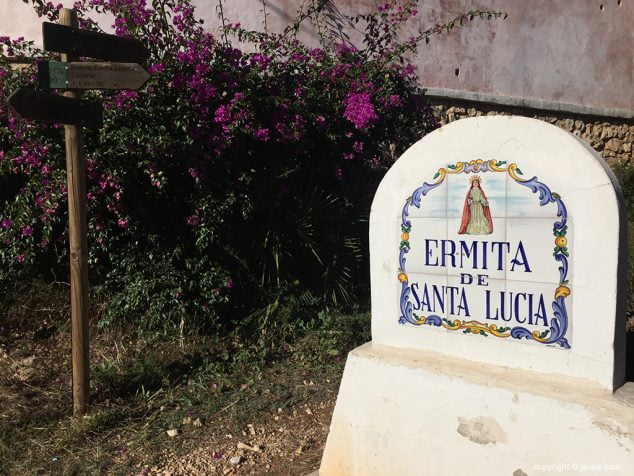 Start of the road to the Hermitage of Santa Lucía 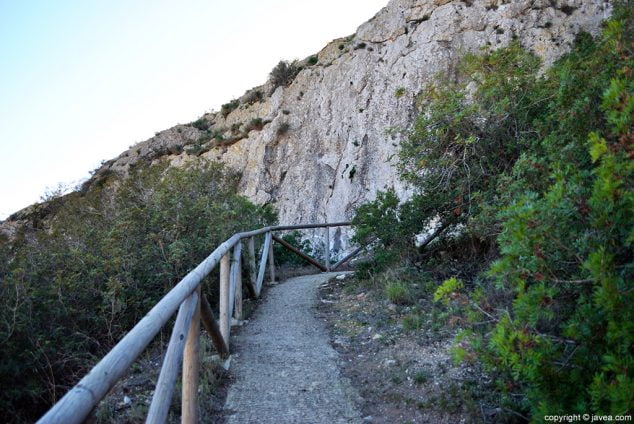 Beginning of the path at the foot of the crag 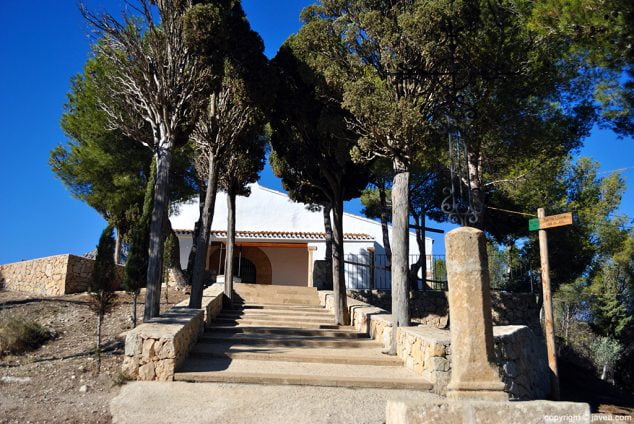 Entrance to the grounds of St. Lucia The chapel has two invocations The chapel is surrounded by numerous pine 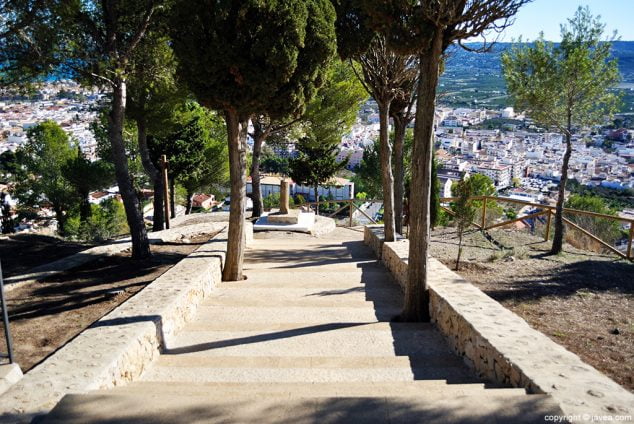 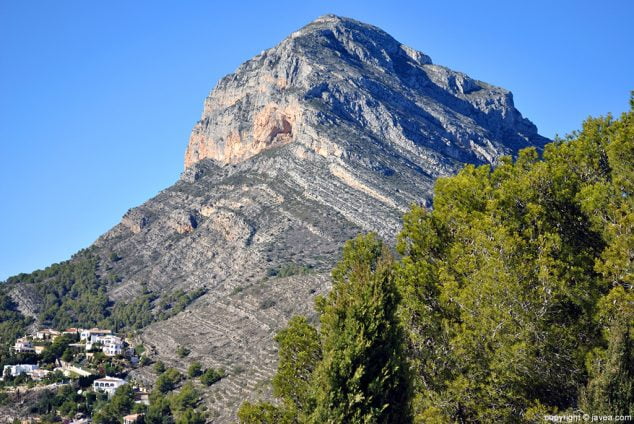 The Montgó watches her second highest point, the rock of St. Lucia 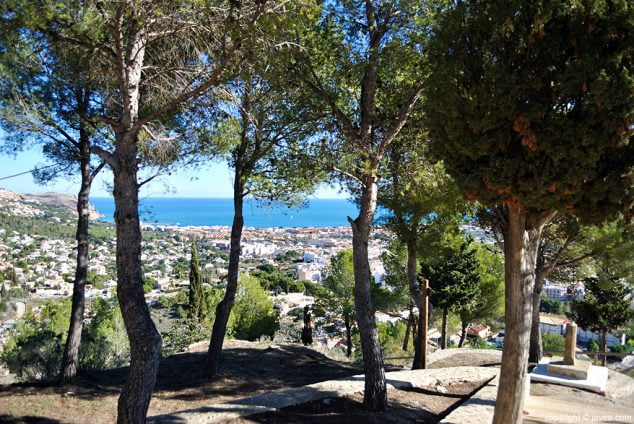 St. Lucia stands at the highest point built in Jávea 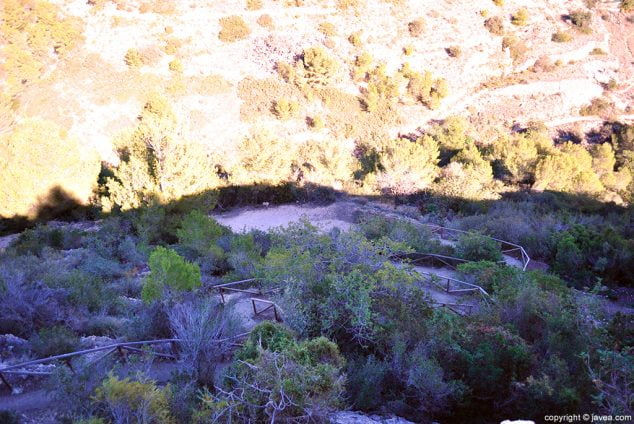 View of the path that leads to St. Lucia