Neighborhood outrage: "the lack of agreement does not allow improving road safety on the Portitxol highway"

The Portitxol road with the Guard is once again the protagonist. For years, residents have been asking to improve road safety on this section of the road. The residents of the area indicate that since the roundabout was built, the pedestrian crossing was not taken into consideration, for which reason they demand that zebra crossings be painted for the safety of pedestrians.

The fact that this road falls under provincial jurisdiction makes it difficult for the action to be carried out more easily, although the residents have already obtained a response to their requests but not the solution they expected. "We are outraged to see how we pay taxes to two administrations that are incapable of reaching an agreement as simple as painting zebra crossings," the residents say. 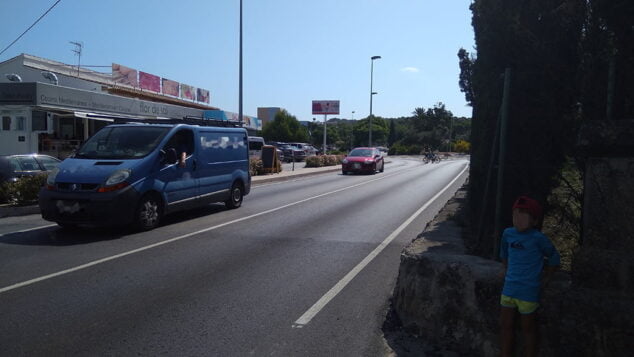 Neighbors of the Carretera del Portitxol request a pedestrian crossing

And it is that, according to the notification that one of the neighbors receives from the Diputación, "the improvement of road safety is abandoned due to the lack of necessary consensus between the Provincial Deputation of Alicante and the Town hall of Jávea, administrations to adopt a final coordinated solution".

The Provincial Council document adds that "the majority of the municipal proposals are incompatible with the Provincial Council's premise of improving road safety for all vulnerable users, guaranteeing the functionality of the road, therefore all the allegations made during the process of public information, given the impossibility of being able to act in a coordinated manner".

Given this response, the councilor responsible for Services, Kika Mata, has explained to this writing that the Provincial Council carried out "an informative study of this road to which it informed us of the possible actions that could be carried out when carrying out a project and to which we replied that some of the options were not were viable due to the use of this road and we proposed others, to which they did not accept".

Even so, the mayor has qualified that "the road is provincially owned, so if the Provincial Council considers installing pedestrian crossings at some of the points on this road, it only has to write a project and carry it out." Mata has added that in the face of the withdrawal announced by the Provincial Council to the approval of the informative study, "from the City Council we will continue to request that the request of the neighbors be carried out."