The Iglesia Fortaleza de San Bartolomé de Xàbia is located in the historic center, in the Plaza de la Iglesia, and throughout its history, it has not only served as a temple but also as a defense. It has been a National Historic-Artistic Monument since 1931, and is considered a BIC (Asset of Cultural Interest) since 2018. The Church of Sant Bertomeu It is the main building in the historic center of Jávea, characterized by its white houses with rough stone lintels. 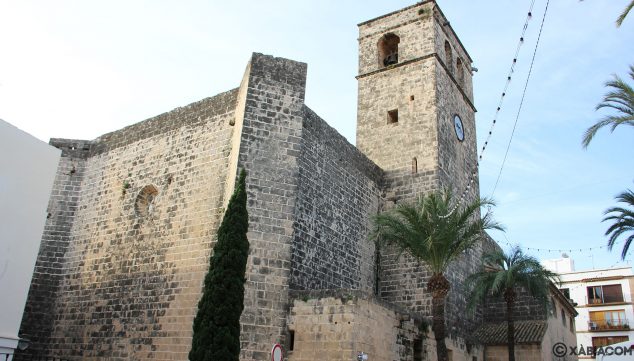 Facade of the Church of San Bartolomé de Jávea

The Church of San Bartolomé is in the historic center in Jávea, in the Plaça de l'Església (the Church Square in Spanish). Here is the plan:

The oldest part of this religious-military building is the current presbytery, built from 1304. In 1513, work began to enlarge the church, led by the architect of Basque origin, Domingo de Urteaga. The reasons for the expansion were the increase in population and the need to stop attacks by Berber pirates. The building served to defend Jávea from attacks from the sea throughout the XNUMXth century. Due to its defensive function, the tagline of "Iglesia Fortaleza" was added to its name. 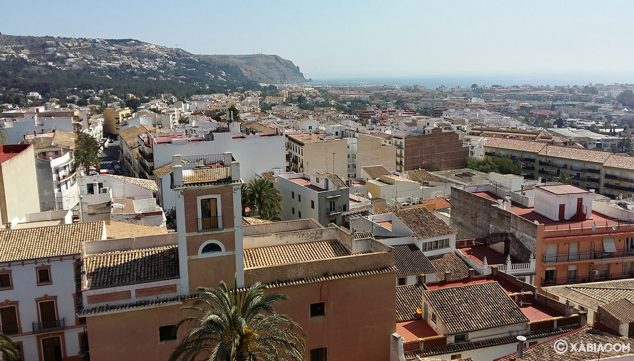 Sea views from the Church of San Bartolomé de Jávea

This emblematic building in Jávea is in the Elizabethan Gothic style. It has a large Gothic nave with three chapels on each side that are framed by buttresses.

The entrance doors are: the main one, dedicated to San Bartolomé, medieval style with pointed arch, gable and pinnacles: 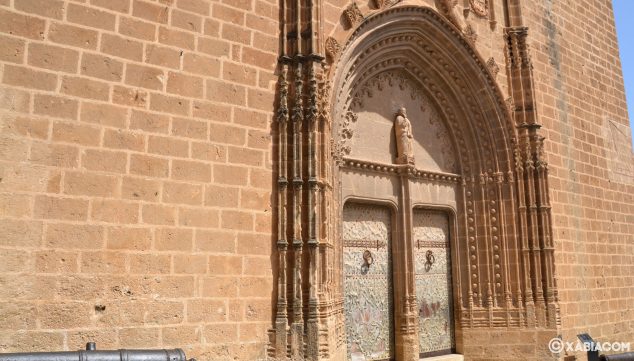 And the side dedicated to San Gil, located in front of the City Hall door, and which is accessed by a double staircase: 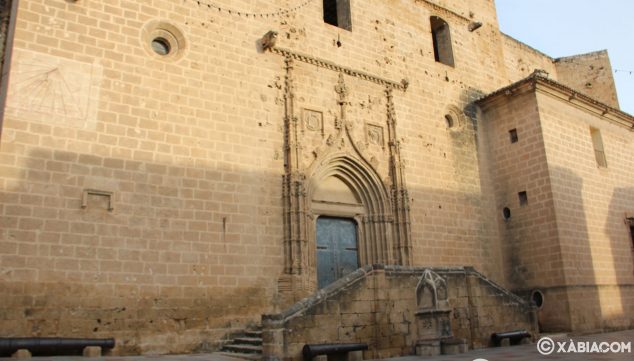 Side cover dedicated to San Gil

The bells have a name: from least to greatest, Victoria, Sebastiana, Mariana and Bertomeua. Currently there are four, but surely they became six, because you see the marks of their installation and the place they occupied. In any case, these four bells are not the original ones either: we know that there have been different bell games, even with other names, and that the last group was founded during the Spanish Civil War, because bronze was very coveted to make weapons and ammunition. The Consueta del Sagristà of 1769, where the touches for each party are explained. In any case, the traditional touches were replaced in 1963 by automatic touches, when mechanization was installed. This specific information is extracted from the web campaners.com, where you can expand it. 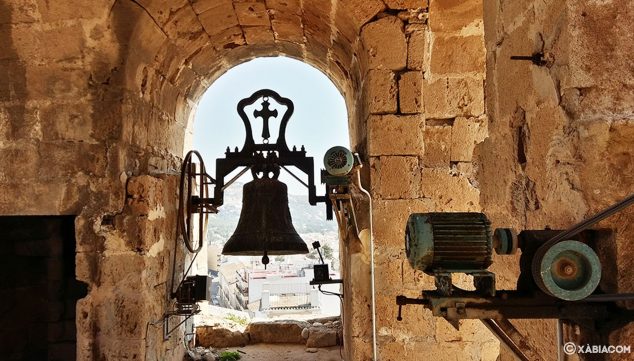 The bell tower, which was also used as a watchtower, was completed in the XNUMXth century and is located at the junction between the apse and the nave. 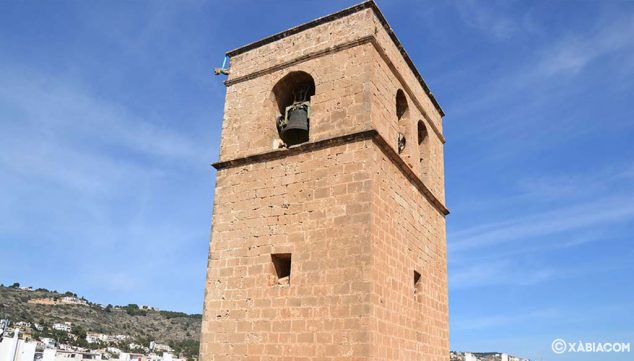 The building is built for the most part with the typical rough stone of the municipality, which was formerly extracted from the deposits that were in the Playa del Montañar or the Cova Tallada, located under the Cape San Antonio. The bell tower, 30 meters high, is also made of tosca. The views are beautiful, because the total height above sea level is 86 meters. 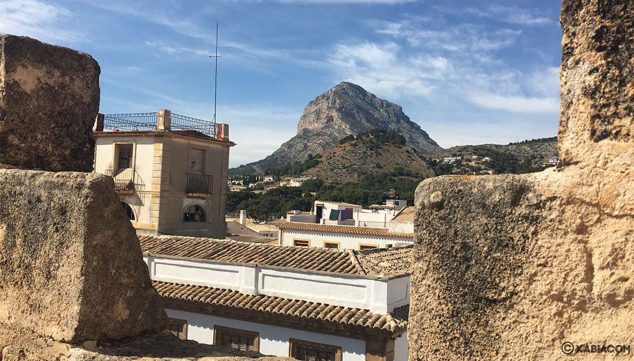 This Church is not characterized by its ornamental elements, they are scarce both inside and outside the temple. The roof is formed by ribbed vaults. 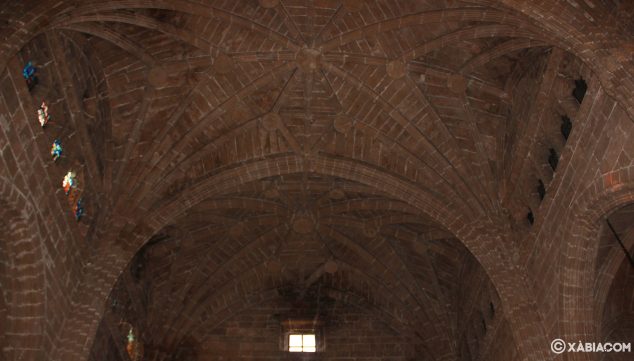 Cross vault inside the Church of San Bartolomé de Jávea

On the chapels runs a gallery or triforium with small arches open to the inner nave and large windows to the outside. 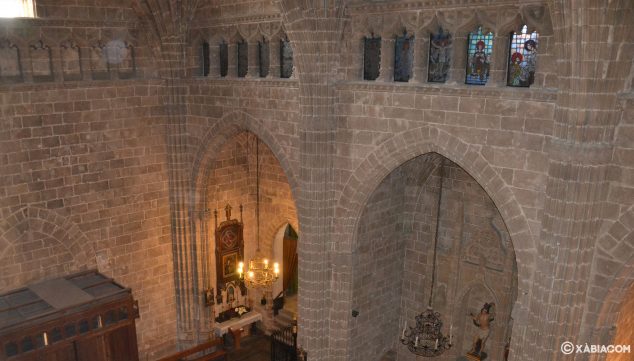 This building is considered one of the best models of ogival art in the Valencian Community. 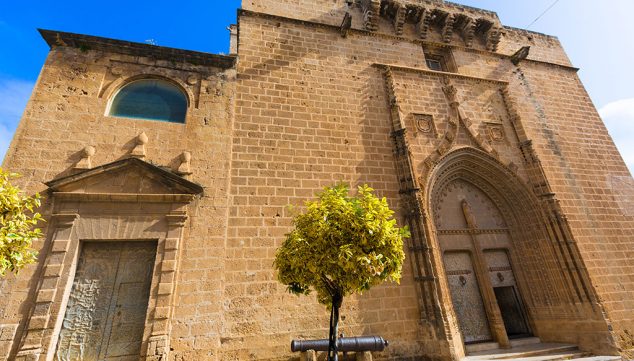 View of the Church of San Bartolomé de Xàbia

At present, the church is pending deep reforms and at some points, quite urgent: for security, you can not climb the bell tower, there are leaks and there is a very deteriorated gargoyle. Restoration works are already authorized but it is waiting for its execution.

The pastor is Salvador Torrent, named in 2016. The church can be visited from 10:30 a.m. to 12:30 p.m. from Monday to Friday, and in the afternoons, Saturdays, Sundays and holidays it is open 30 minutes before Mass. 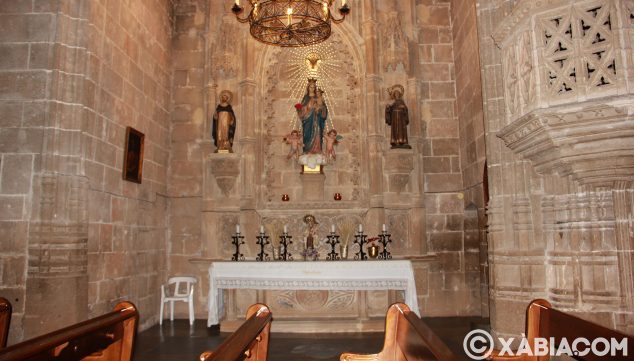 Side chapel in the Church of San Bartolomé de Jávea 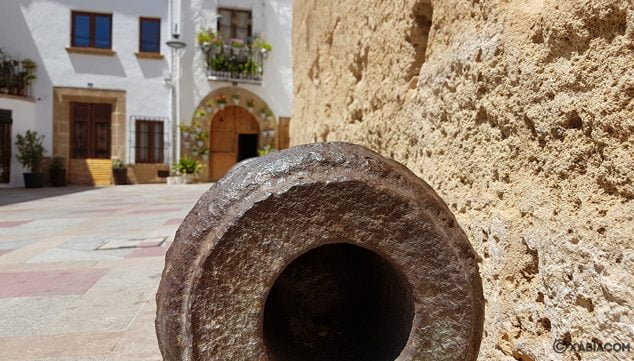 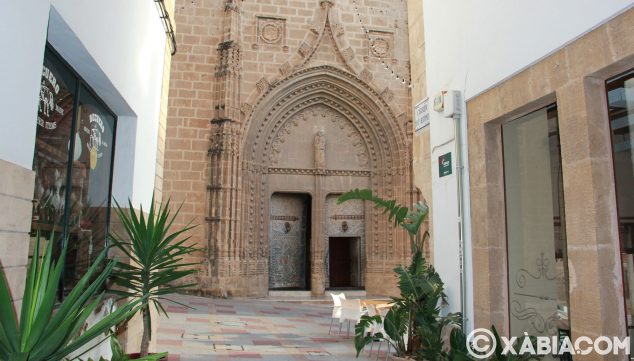 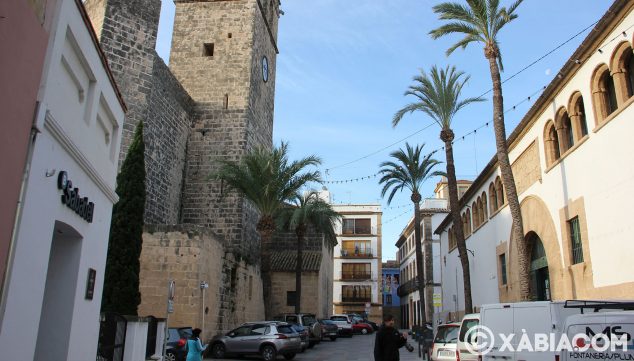 San Bartolomé church in front of the Javea market 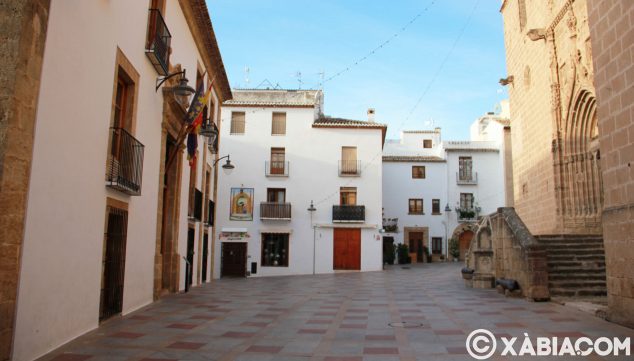 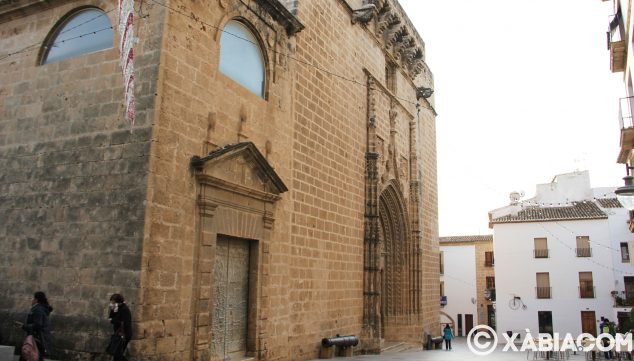 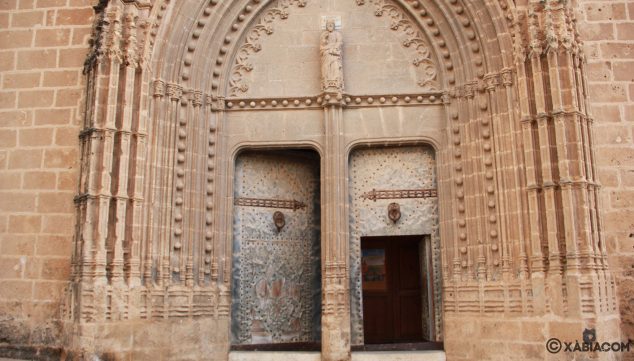 Main entrance to the Church of San Bartolomé de Jávea 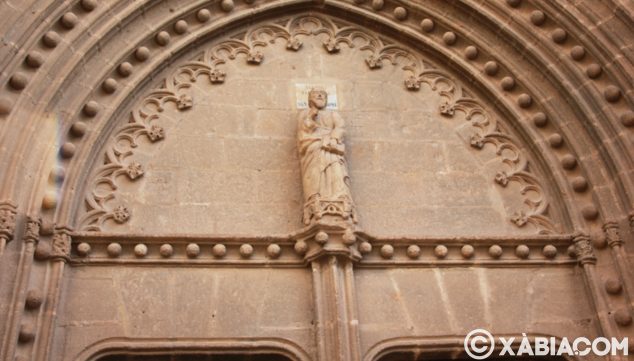 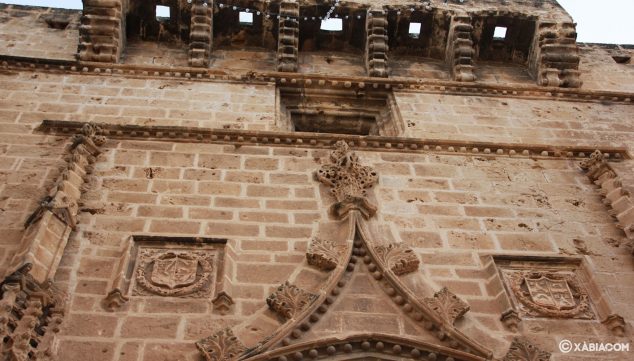 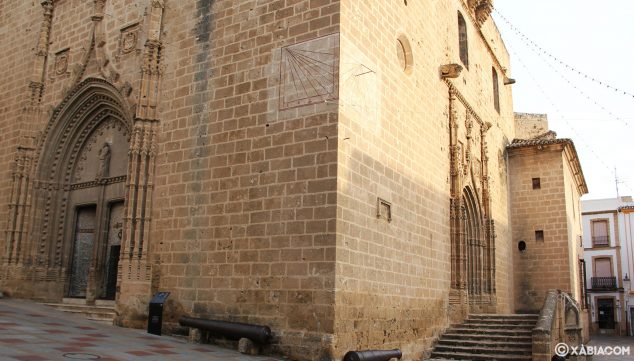 Sundial in the Church of San Bartolomé de Jávea 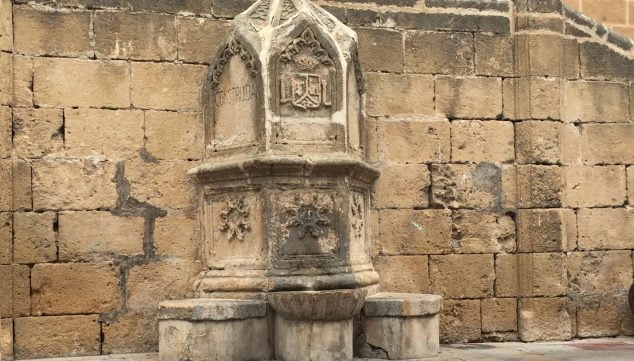 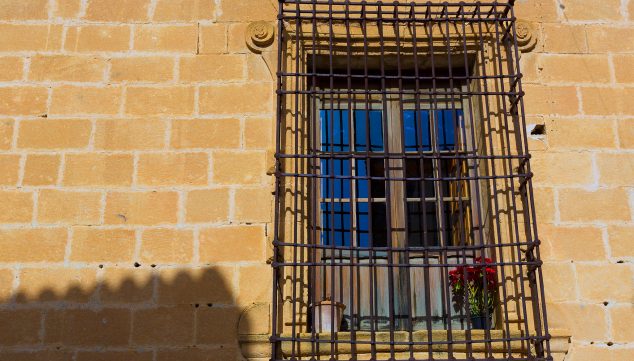 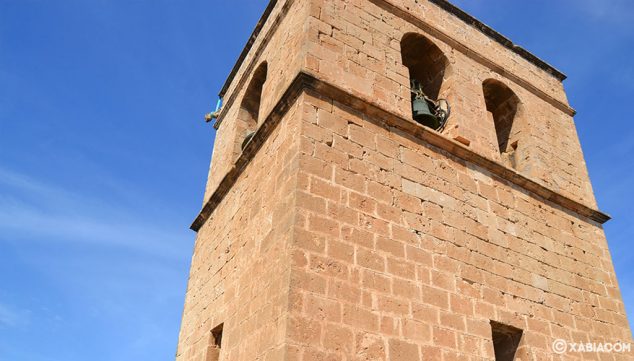 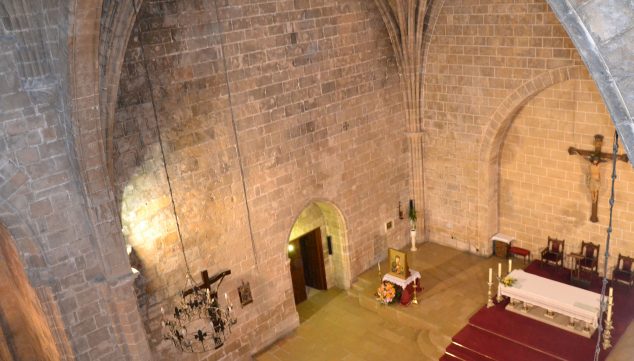 Main altar of the Church of San Bartolomé 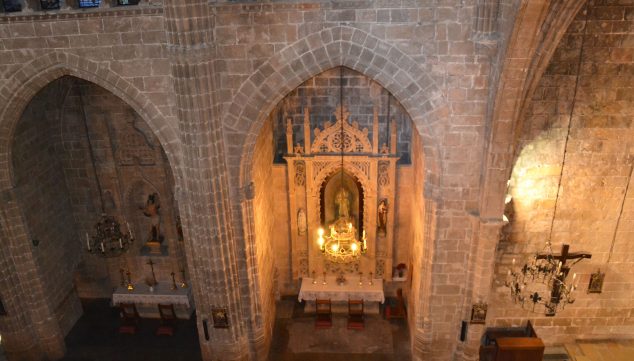 Side chapels in the church of San Bartolomé de Jávea 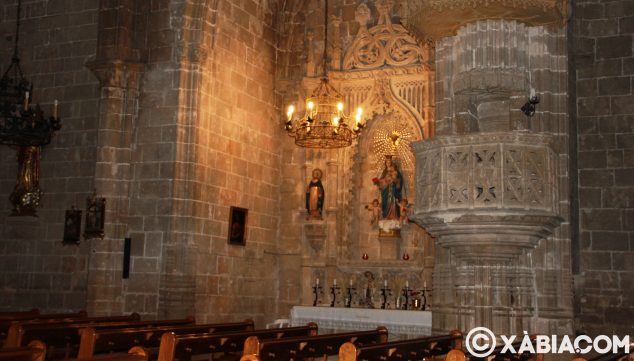 Chapel and pulpit inside the Fortress Church of San Bartolomé 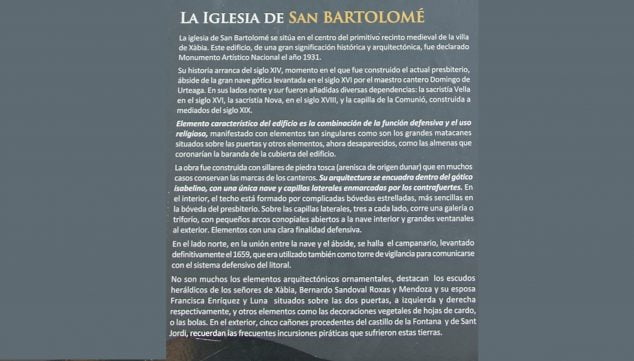 Xàbia will request an aid for the rehabilitation of more than 400.000 euros of the Castell de la Granadella
August 18st, 2022

28.803
2.017
9.411
796
We use cookies necessary for navigation and traffic analysis. We do not use cookies that provide us with personal data or advertising cookies.
More optionsACCEPT
Manage consents