For the past week and during this month, a second archaeological excavation campaign has been carried out in the Roman site of Frog, municipal term of Gata de Gorgos, in charge of the University of Alicante. Several students from the history and master's level of archeology at the university are working on the site, coordinated by a research team from the Faculty and the Museum of Xàbia.

The excavations are directed by Ximo Bolufer, Juan Francisco Álvarez, Jaime Molina and Daniel Mateo, who is the director of the project funded by the Municipality of Gata and the University of Alicante. 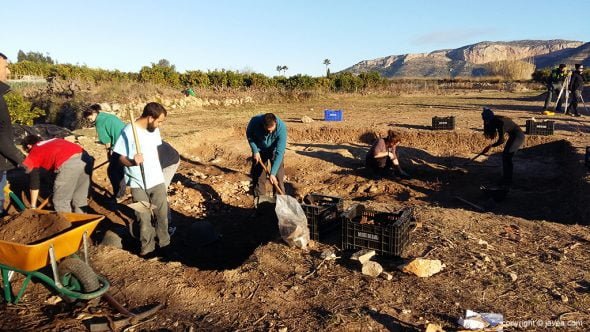 It is about the existence of some potteries from the Roman period dedicated to the production of amphoras to pack wine. As explained by the experts, this center was in operation during the second and third centuries after Christ and could be related to the Roman villa of Els Eclés. According to Álvarez, "The facilities found are divided into two parts, the habitable and the productive part. This year we have excavated a wall that is a part of the terrace or bench that separates the production part from that of the ravine, where they threw the broken pottery. from a georadar we saw that there was a very large potential and therefore, this year a much larger cut has been opened. "

The results corroborate his idea, "a wall that covered the whole plot and in the back accumulations of huge ceramic spills".

Among the remains found, documented productions of various types have been discovered: Vinales amphoras for the transport of flat-based wine, common ceramics and construction. Álvarez says that the amphoras, "The only meaning they have is to transport the wine in barges and possibly across the river and to another distribution point that was most likely Dénia, until recently it was not known that there was an important production of Valencian wine at the time Roman. " The amphoras found have the scientific name of galloise four, "If we manage to reach the lower levels of the landfill we can know that it happened first and therefore the what and if there were more than one type of amphorae"explains the archaeologist.

"The amphorae that came from the Betica, Andalusia, came full of oil and then broke them. They were not reused since the cost of transportation was higher than making new amphorae", says Álvarez. On the quality of the clay of the amphoras found indicates that it is very good, "has water and earth". The excavations continue, at the moment they do not have located the furnaces but it assures that "They should not be far. A ceramic production factory in Roman times can be equivalent to a bottler of a well-known brand of beer. A large industry specialized in a service that lasted all year.".

Between 12 and 15 people work each week in these excavation works, who are also in charge of accumulating the extracted material, washing the pieces, separating them and classifying them for study. The remains are being deposited by the Soler Blasco Museum.

In this archaeological work, the Cirne de Xàbia Foundation will collaborate with the restoration of some singular piece.

The sites and findings of the Iberian era in Xàbia, protagonists in the 'Quaderns del Museu'
May 20th 2022