La Filà Contrabandistes de Xàbia is one of the last rows that were created at the Fiestas de Moros i Cristians. It was founded in 1999, and its first participation in the festivals was in 2000. La Filà has its own statutes that regulate the positions and operations of La Filà, which are biannual by rotation.

La Filà was conceived, how could it be otherwise, at the wedding party of a mutual friend of the vast majority of founding members. From there, the components began to recruit people from different groups of friends from Xàbia and in just one week after this start-up, they held their first meeting. Now, as they point out from the filà, these people from different groups have been friends for 20 years. 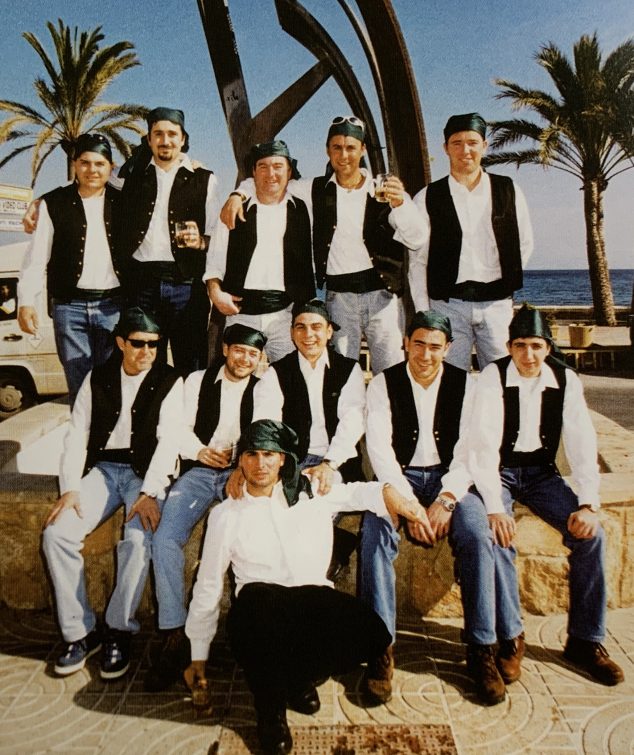 The decision of the name of the Filà, was to provide a point of originality. La Filà explains that in Xàbia, at that time there was no troupe that had a style "smuggler, llaurador, student, etc" for this reason they opted to differentiate themselves and to diversify the costumes of the parade, this
name although they are considered "more smugglers than students", say the founders.

The Filà crest symbolizes the essence of the typical smuggling filà, with the most characteristic Smuggler's weapons, blunderbuss and razor, escorting the Xàbia crest and the background of it, the color of the filà, ending in a morellana blanket finish , also characteristic of the smuggling suit. 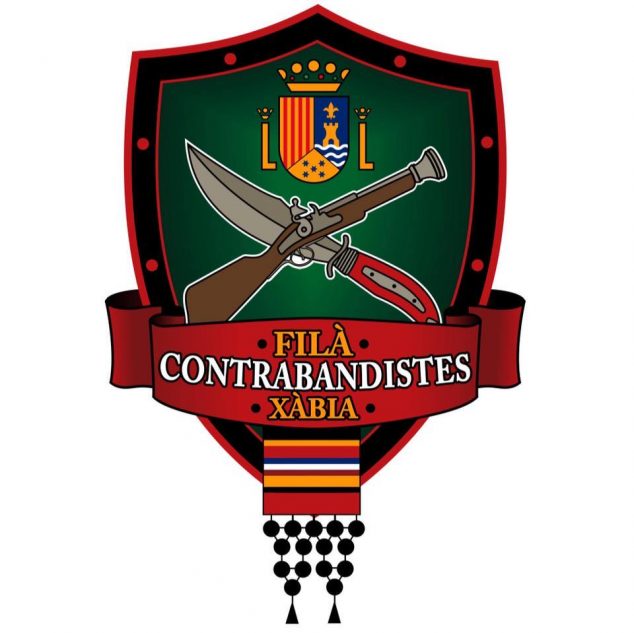 La Filà began its journey with a total of 15 members, currently 19. Over the years, participants have been entering and leaving, currently 8 founding members. When incorporating a new member into the filà, the members must have a unanimous yes.

La Filà is characterized by being totally masculine, although since its inception it has had a troupe of boys and girls and in the years of captaincy a female troupe of smugglers has paraded. 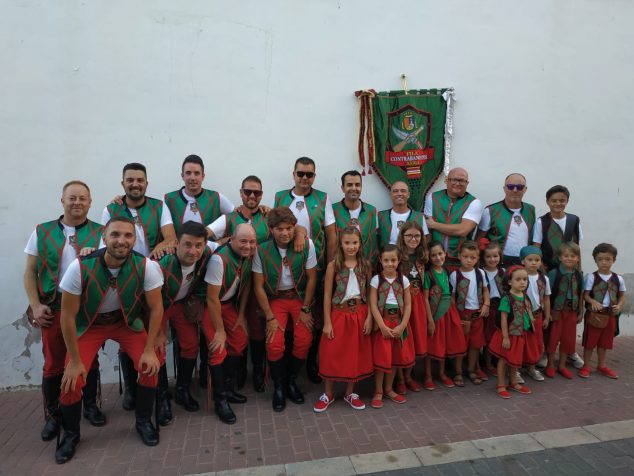 Squad of men and boys from the Filà Contrabandistes de Xàbia

The colors that identify La Filà are green, black and red. Like every filà, Contrabandistes de Xàbia has a battle suit and a parade suit. The daily uniform consists of red pants, an embroidered black vest, a headscarf and a green sash. 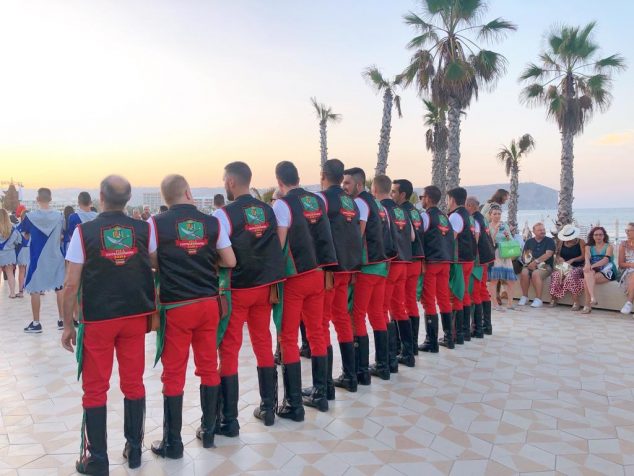 As for the costume for the parade, the Filà usually presents typical Smuggler style outfits with pants, shirt, vest and blanket morellana with typical smuggler's hat and blunderbuss or razor in hand.

Since the founding of Filà, Contrabandistes de Xàbia has held the position of standard-bearer on four occasions and twice, that of Captaincy. 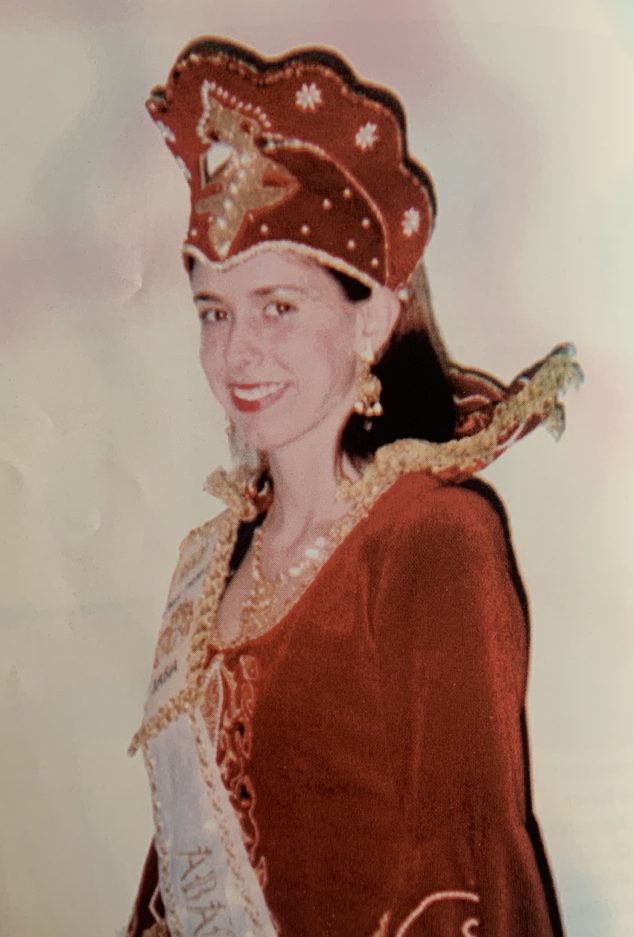 The first captaincy was in 2006 with Julián Meneses Sapena and Esther García as captains. Years later, in 2014, Cesar Rodriguez Male, he was the captain of Filà.

Like every Filà, the involvement of the Contrabandistes de Xàbia components with the rest of the lines so that the parties are better every year is maximum. Thus, one of its members and founder, Francisco José Moya, served as President of the Central Party Board in 2010 and 2011, along with Miguel Ángel Devesa as secretary of the Board and Miguel Caselles as treasurer.

It is a double step created exclusively for the party of Moors and Christians, in a standard pasodoble format and in which Moorish airs are interspersed on a smaller oriental scale and Andalusian and jovial nuances in a greater key, typical of the south of the peninsula. This pasodoble has an Arab and Andalusi spirit.

So, for the parade, the Filà Contrabandistes de Xàbia intersperses this pasodoble with the march 'Caridad Guardiola', characteristic march of the Filà.

Contrabandistes de Xàbia, since its foundation, has been in various barracks within the Duanes neighborhood, but for 14 years now, its social premises have been installed in the old disco "Viking", at the confluence between Calle Sevilla and Andrés Lambert.

In this place they celebrate their Filà festivals highlighting the traditional Saturday meal where Filà invites all its advertising providers and friends and organizes the "water party", and on Sunday, the last day of festivities, after the pout, the Contrabandistes usually make an outing for the pairs of each filà. 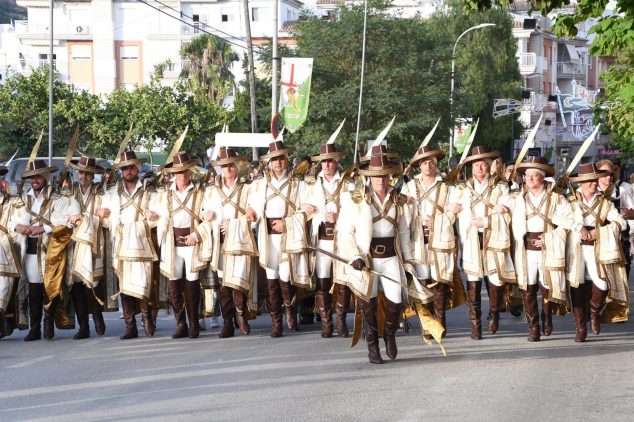 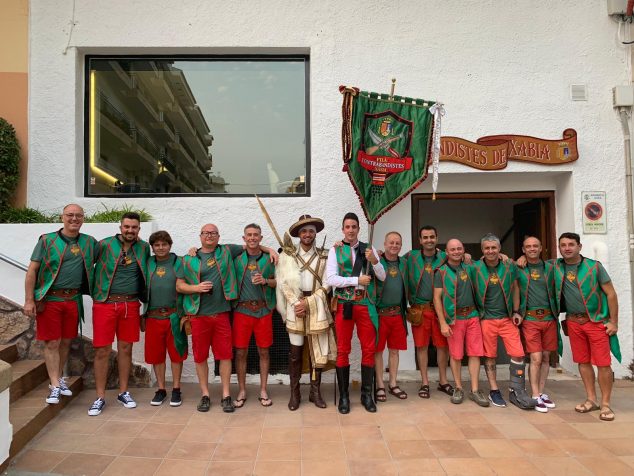 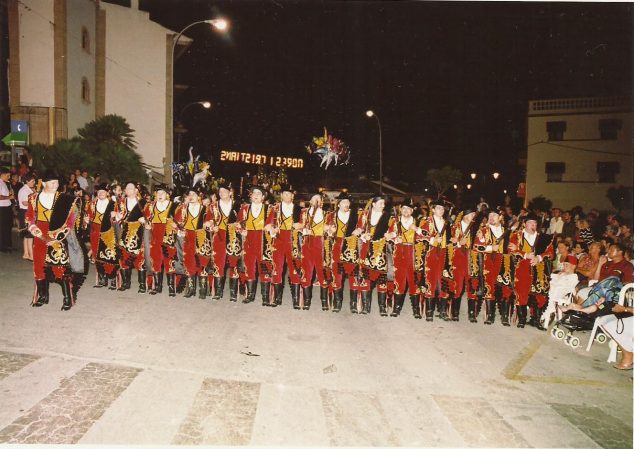 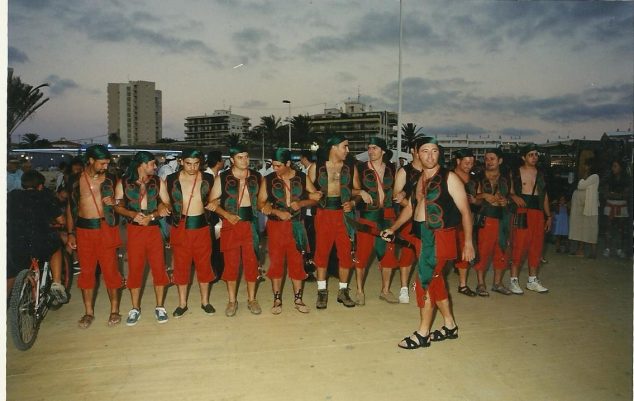 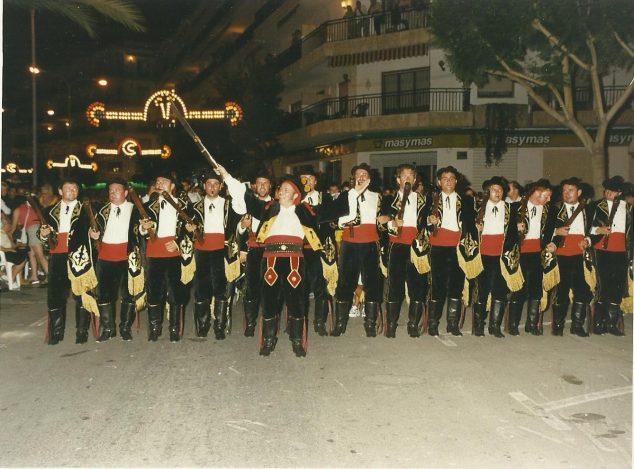 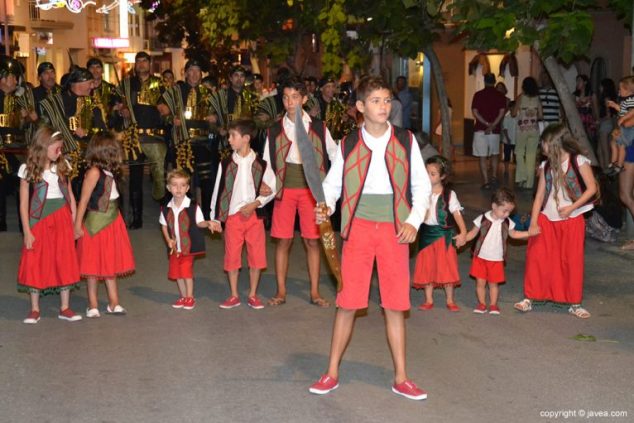 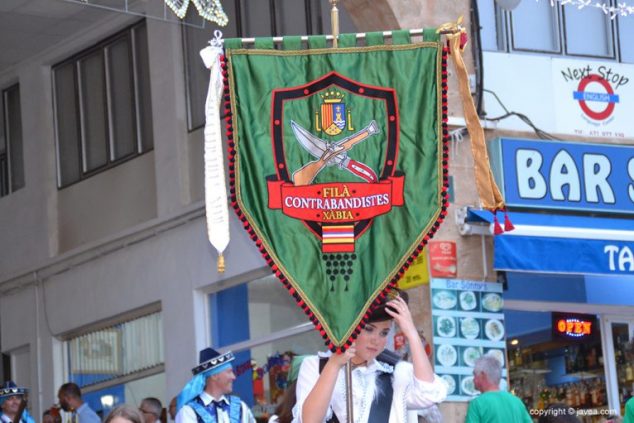 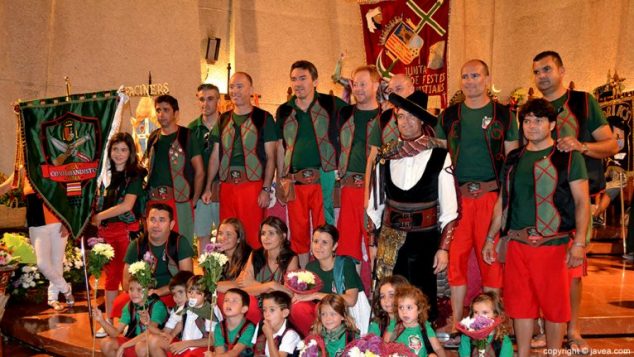 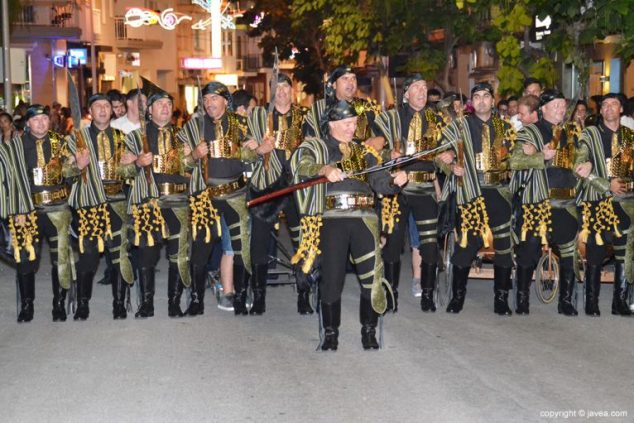 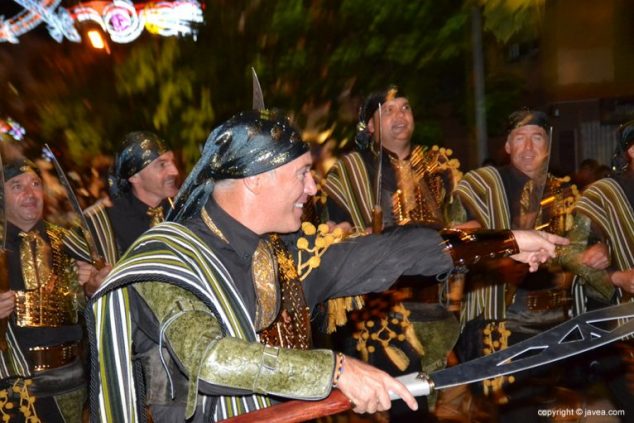 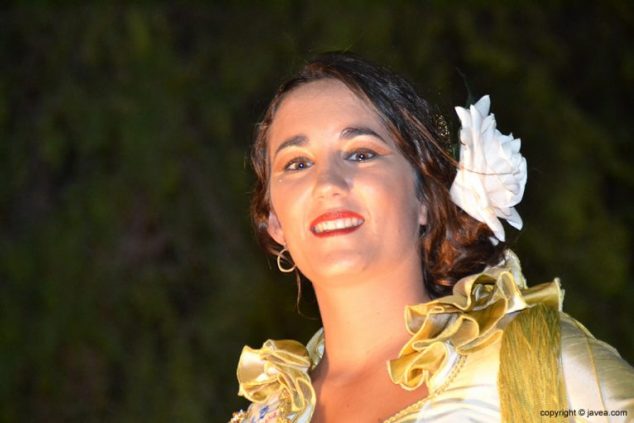 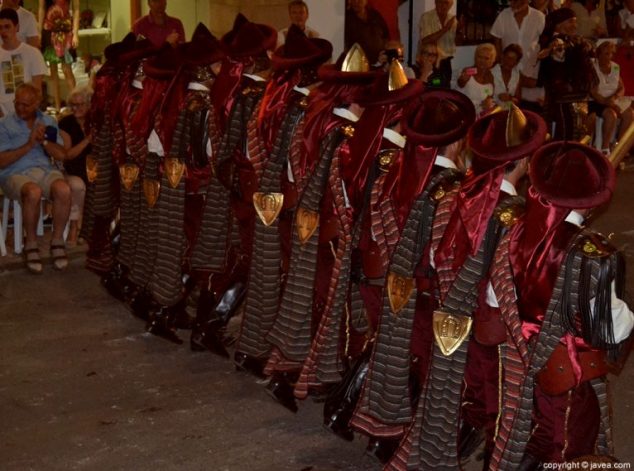 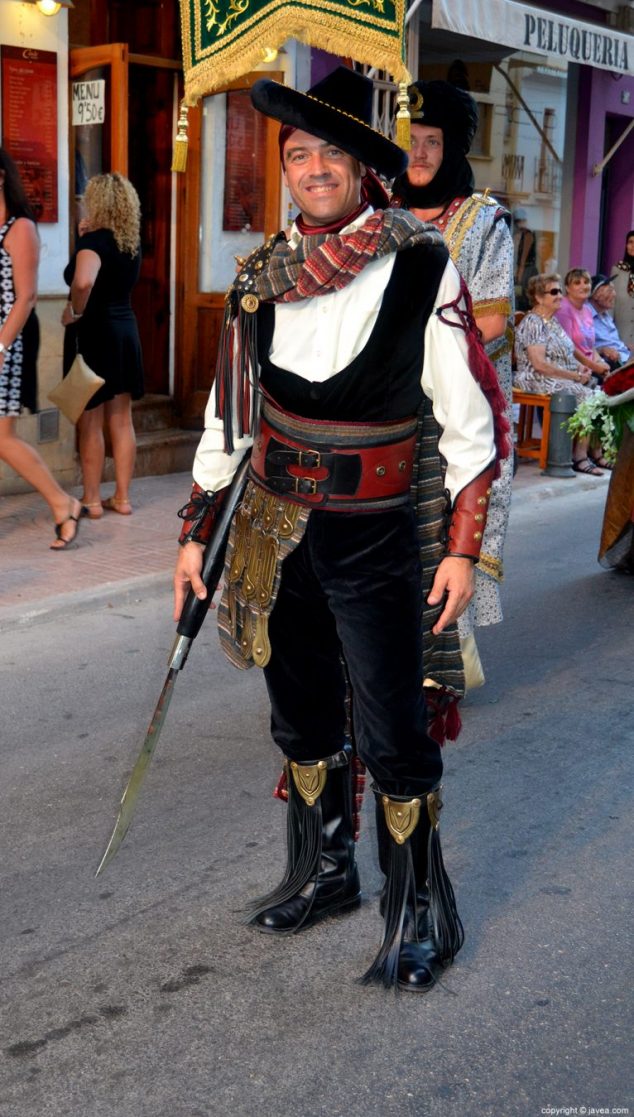 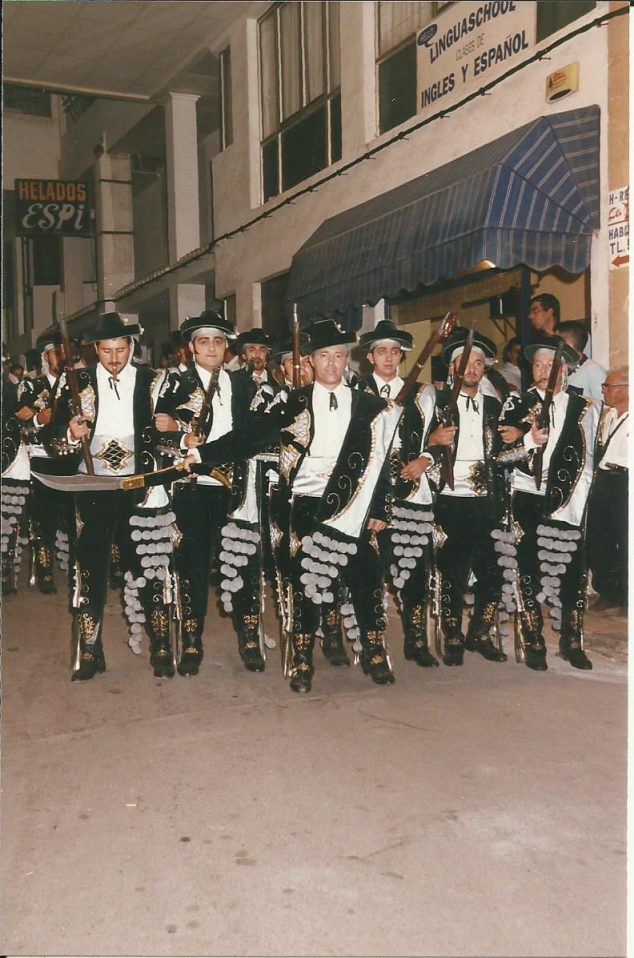