The sea invades the coast of Xàbia

The strong maritime storm that has been affecting the entire coastline of Xàbia since yesterday afternoon Sunday is leaving bleak images in Xàbia. The promenades of La Grava, Spanish Marina, Arenal and La Caleta have been greatly affected by the waves. The force of the sea next to the drag of stones has caused multiple damages in buildings, houses, shops, streets, etc.

In addition, the destruction, which invades a large part of the pedestrian crossing areas and vehicle traffic, has been cut while currently (14 hours), in addition to the rides, Mediterranean Avenue and Overseas Avenue, Bologna Street, Street Milan.

Also, as we have reported, the river has overflowed in two points Therefore, roads that cross the Gorgos River and natural spillways such as Camí de Barranc de Lluca and Pont del Llavador have been cut. 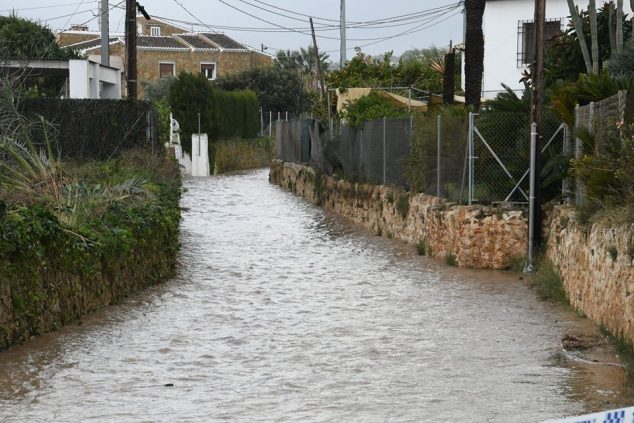 The overflow of the river fills the nearby roads with water

The incidents due to the maritime storm, rain and wind have caused power outages in different areas of the town, falling trees that have cut through traffic and traffic, signs and billboards, small vehicles, etc.

It is recommended to stay away especially from coastal areas and close to the Gorgos River and not leave home if it is not strictly necessary since it is a danger to be dragged by currents or reached by any object that is propelled by strong gusts of wind.

From the State Meteorological Agency they have deactivated the red level due to coastal phenomena, thus activating the orange level, since the storm seems to remit slightly, but the waves can still reach four meters in height.

As for the wind and rain situation, the preemergence passes to a yellow level with wind gusts that could reach 80 km / h.

This alert is activated until noon tomorrow Tuesday but there are changes in the weather evolution.

We leave different videos of how the storm was observed early this morning.

'Puff' will give security and strength to the children, in the Hospital of Dénia, before going to the doctor
18 of February 2020

Participate in the Wedding Weekend of Hotel Les Rotes and show your service for weddings
more promotions Browse Contests
The weather in Jávea
Jávea
febrero 19, 2020