El CD Jávea has cleared any doubts and already knows that the 2020-21 season will play in Group V Preferred. A group of 14 teams that include the clubs from the La Safor region, Portuarios, Racing Rafelcofer, UD Tavernes and CF Gandía. They are joined by the teams from the Marina Alta region, Pego CF, CD Dénia, EE Pedreguer, CD Jávea and UD Calpe, plus the teams from the Marina Baixa region, Racing Benidorm, CD Benidorm and La Nucia CF ' B '. 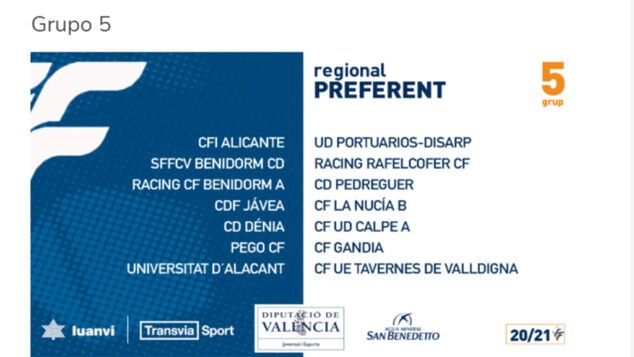 The group is completed by two teams from the capital, the CFI Alicante and the Universitat d'Alacant. It is one of the most powerful groups in the category, where in addition to the two teams that played promotion playoffs last season, UE Tavernes and CFI Alicante, there are clubs that have been greatly strengthened for this season. Among the most direct rivals that CD Jávea has, they are in CF Gandía who, after his merger with the EU Gandía, has a very ambitious project led by ex-player of Valencia CF, Libero Parri.

Another direct rival is Racing Benidorm, who after joining Ciudad Benidorm and Calvari, have signed very important players with experience in the category and with a solvency coach such as Antonio Villaescusa.