The crosses of the term of Xàbia: history and location

Xàbia has 16 rough stone crosses scattered throughout the municipality. At the time, they served to mark the boundaries of the municipal term, the location of the old gates of the wall or were located next to religious buildings. They are declared an Asset of Cultural Interest (BIC) despite the fact that on many occasions they have not been granted the value they deserve as historical and cultural heritage.

The information that we develop in these lines is extracted from the study "The crosses of the term of Jávea-Xàbia", by Francisco Iglesias Bayarri, and the article by local archaeologist Joaquim Bolufer Marqués, "Les creus de terme de Xàbia", published in 2008.

The term crosses are located at the entrances of many cities, as a mark of territory recovered from the Muslims. That is why most dates from the Reconquest, due to the need to delimit the places that had returned to Christianity. In medieval times they used to be found around cities, at crossroads and on access roads. But today, with urban growth, many have been "swallowed" by cities. This is the explanation in literal words of Iglesias Bayarri:

"The term cross is a type of public monument that generally consists of a circular or polygonal base or platform that supports a shaft topped by a capital with a cross carved in stone (...) These stone crucifixes usually hide numerous details and extensive symbols that are often difficult to decipher. The image of the crucified Christ is the main figure and is always facing the main road (...) In the ancient Kingdom of Valencia these crosses began to rise of stone, also known in these lands as peiró or humilladero, between the end of the 1372th century and the beginning of the XNUMXth, during the Reconquest, being the first stone cross that was erected in the City of Valencia that of the Camino Real de Morvedre, dated in the year XNUMX. "

History and characteristics of the crosses of Xàbia

Most of these term crosses were destroyed during the Civil War, except that of the hermitage of Sant Joan, next to the cemetery. And they have not been highly valued, because the authorities have taken a long time to take charge of their conservation: in 2013 they were included in the municipal inventory.

The material from which they are made is almost exclusively rough stone (the typical sandstone of Xàbia, golden in color), to which some metallic or calcareous stone element is added. The crosses at the end of Jávea are very simple, with little or no ornamentation (the exception here is the Portal de la Mar). They can be between two and three meters high.

What and where are they

Some of these crosses in Xàbia are in front of the hermitages, others in the old portals of the wall. Several are more or less in their original place, but others have been displaced by urban pressure and the remodeling of streets and roads.

The Cross of the Hermitage of Calvario

This cross is in front of one's own Calvary Chapel, in its original location, without displacement. Previously in its place there was a wooden cross on tiers. However, the current one is made of wrought iron with a circle in the center and with plant motifs. It stands on an octagonal shaft and quadrangular at the ends. The set rests on three rough stone circular steps. 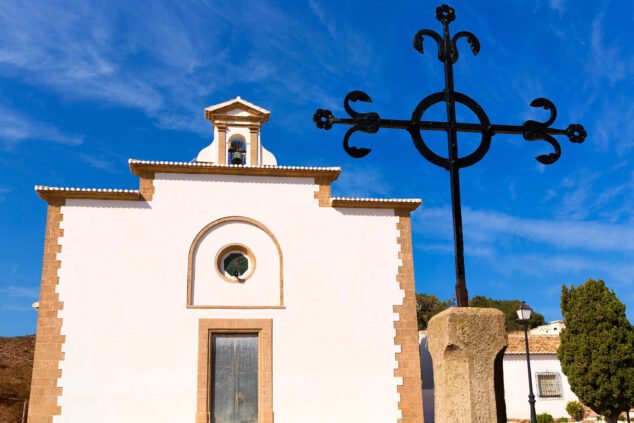 Cross in the hermitage of Calvario de Jávea

The Cross of the Camino de Santa Lucía

It is located at the crossroads between the Camino de Santa Lucía and the Camí dels Canons (current Avenida de Ángel Doménech), the point where the road begins to the hermitage of Santa Lucía and Santa Bárbara. From here, about 15 minutes on foot, we arrive at the hermitage. The cross is made of rough stone with an octagonal section without decoration, and stands on an octagonal shaft topped by a simple capital. The set rises on a square base and two quadrangular stands. 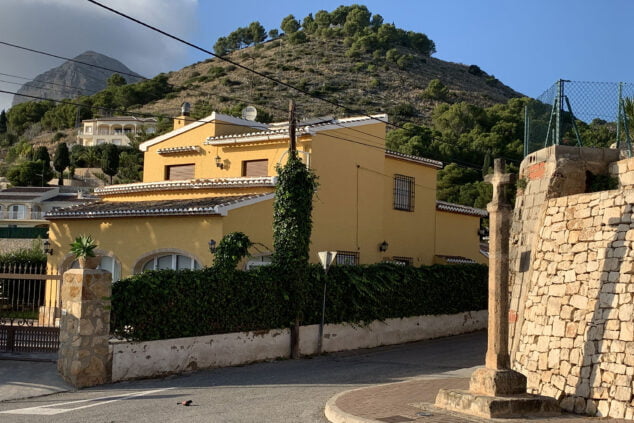 The Cross of the Hermitage of Santa Lucía

It is rough at the base and shaft and with a metallic upper part. It is located in front of the hermitage, preserving its original location. 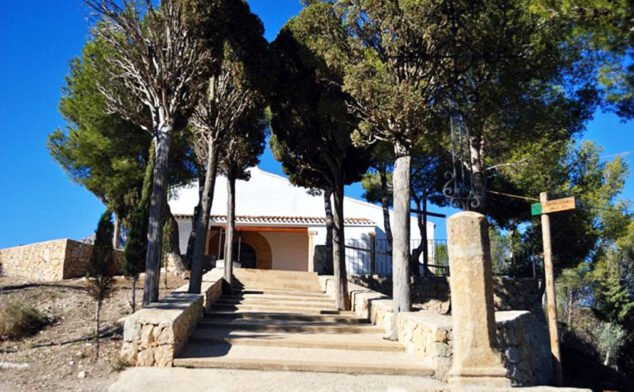 Cross of the Hermitage of Santa Lucía

The Cross of the Hermitage of Pòpul

This cross retains its original location, in front of the Hermitage of Pòpul. Made of rough stone with octagonal section and without decoration. It stands on an octagonal shaft with a square capital. At the base it has two superimposed dice of different sizes on a square stand. 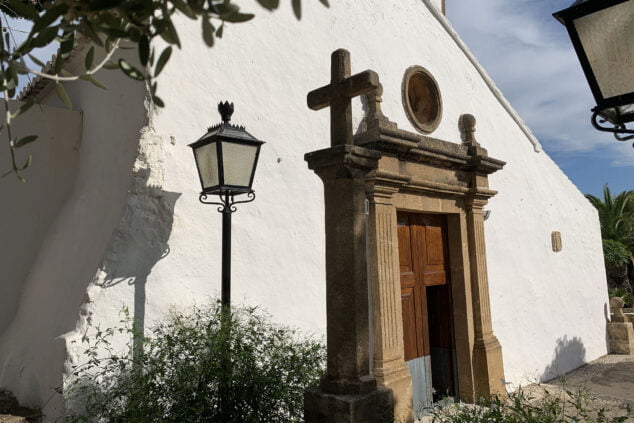 Cross of the hermitage of Pòpul de Xàbia

The Cross of the Hermitage of San Juan

In the hermitage of the same name, it is the only cross that was not destroyed during the Civil War. The cross of Saint John, also known as the cross of the Camí vell de GataIt is octagonal in section without decoration. And it rises on an octagonal shaft, with a square section base and capital. It is not in its original location. 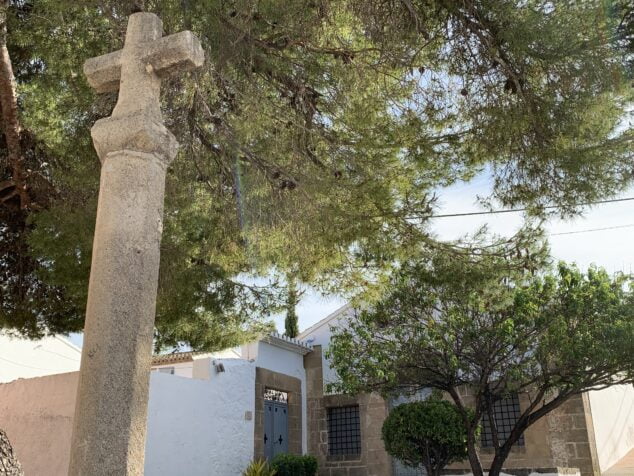 Cross of the Hermitage of San Juan de Jávea

The Cross of the Colomer

La Cruz del Colomer (from the dovecote, in Spanish) has been documented since the end of the XNUMXth century, where it is named as Enpalomar cross. It is displaced from its original place: right now it is at the intersection of the Jesús Pobre road and the current Barcelona street, the old Serpeta path. It is a rough cross with a circular section without decoration. The set rests on an octagonal base and two quadrangular stands. 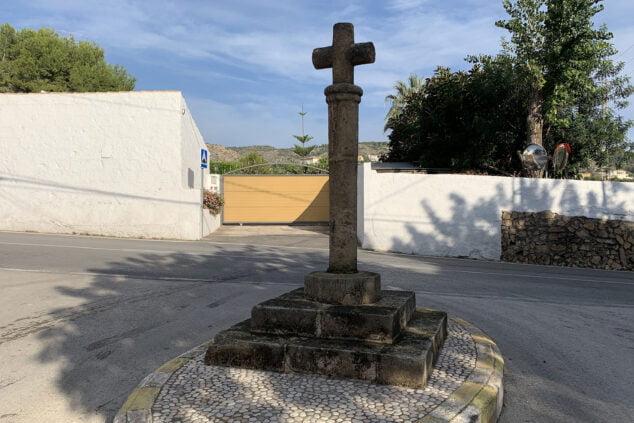 The Cross of Armella

It is a new cross, placed in the 1990s, which replaces the old missing cross. This is the original location, at the crossroads of the paths of Poble Nou de Benitatxell, the old path of Teulada and the path of Lluca, an old abandoned village from the 90th century. At this point, various archaeological remains have appeared. Its name is probably a distortion of "vermella", "red" in Valencian. It is also known as Cruz de Tarraula. It is carved in rough stone and has an octagonal section without decoration. It stands on an octagonal shaft and everything rests on three quadrangular tiers and a masonry base. The current cross is new because it was stolen and replaced in the XNUMXs of the last century. 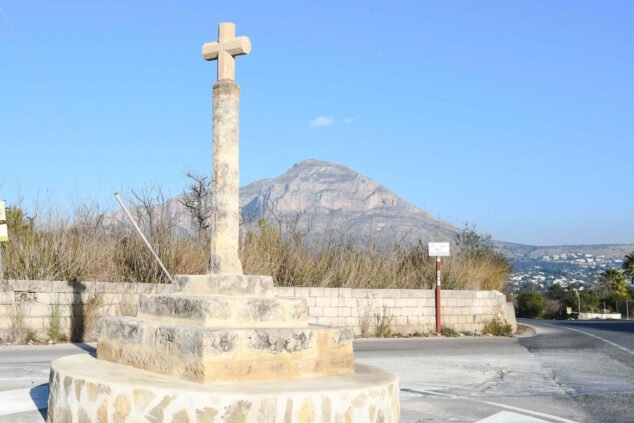 The Cross of Armella de Jávea

The Cross of the Old Way of the Sea

It is in its original location, next to the roundabout that links the Cami Vell de la Mar with the avenue of the Port. It is a rough stone cross with an octagonal section without decoration, raised on an octagonal shaft that becomes square at the base. The whole set sits on a square base and two quadrangular stands. 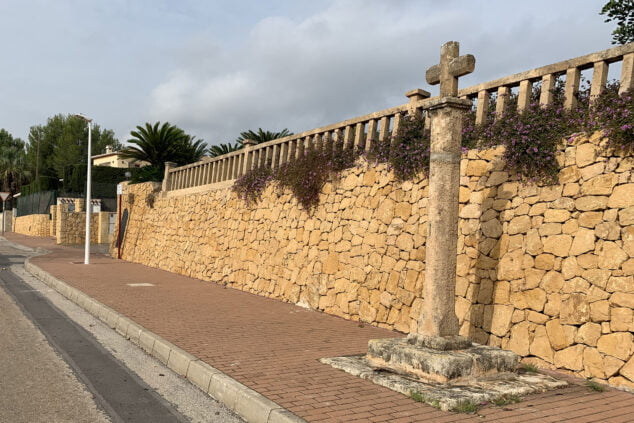 The Cross of the Portal de la Mar

It is a bit displaced from its original place, which was the portal in the old wall known as Porta de la Mar. Right now it is at the intersection of the Ronda Norte with the Ronda Sur. It is one of the most decorated crosses: it is made of rough, on the obverse it has the figure of Christ crucified and on the reverse the anagram "JHS". It stands on a Solomonic column decorated with vines and bunches of grapes. In the capital the shield of Jávea is represented and the date of its construction is stated: Jávea 1944, although it has been documented since the XNUMXth century. It is the work of the Tuscan master Vicent de Gràcia. Everything rests on a base and two octagonal stands. 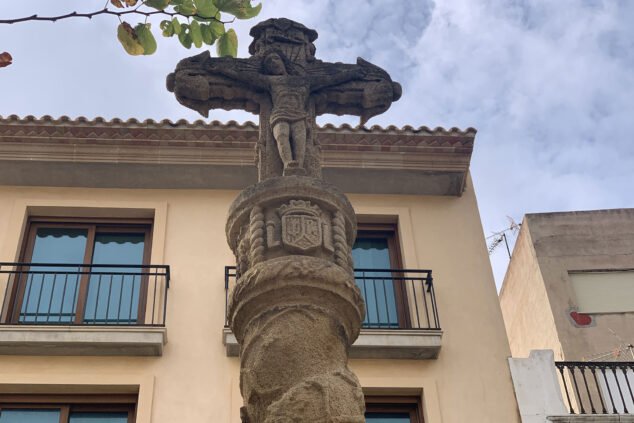 Creu Portal of the Sea of ​​Xàbia

The Cross of the Portal del Clot

In the same way as that of the Portal de la Mar, the cross of the Portal del Clot is in the location where the portal of that name was on the old wall. Slightly displaced from its original place, it is exactly at the intersection of Calle Roques and Portal del Clot with Ronda Sur. It is made of rough octagonal section, without decoration, and stands on an octagonal shaft that becomes square at the ends. The set rests on three steps of blocks of quadrangular section. 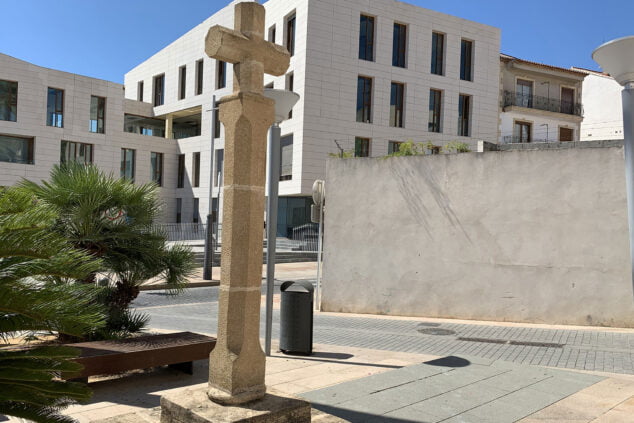 The Cross of the Arenal

Delimits your own Arenal Beach. It is a rough carved stone cross, with a one-piece cylindrical shaft. Without decoration, it has an octagonal section that starts from a cylindrical capital with vegetal motifs. It is displaced from its original location. 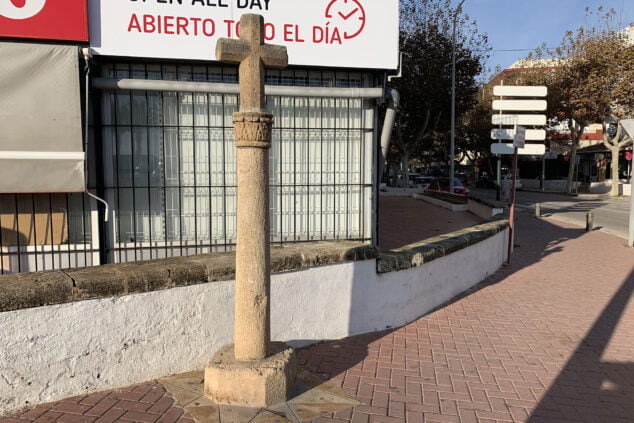 Cross of the Arenal de Jávea

Outside of its original location, it is next to the road that goes up to Cabo de la Nao, near the cove and looking towards the islet. Of rough carved stone, with a cylindrical shaft on a square base and on three also quadrangular steps. Without decoration, it has an octagonal section and starts directly from the shaft. It also does not have a capital. 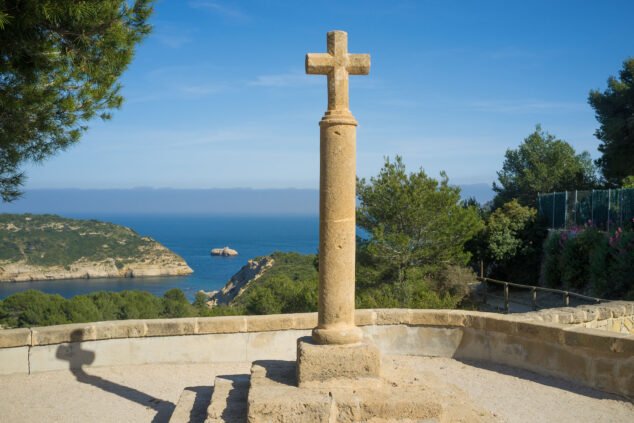 The Cross of Les Valls

Next to the Jesús Pobre road, at the junction with the Camí de les Valls. It is made of carved rough stone, a cylindrical shaft and a square base, sitting on three circular steps. The cross has an octagonal section and is not decorated at all. It is not in its original location. 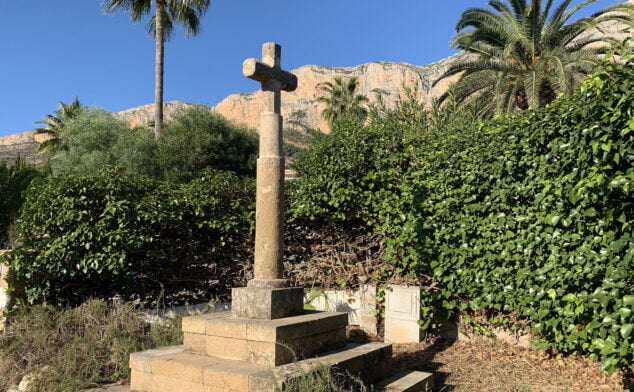 Image of the Cross of Les Valls de Xàbia

The cross of the Monastery of La Plana

It was originally located at the entrance to the sanctuary, but today it is inside the cloister. 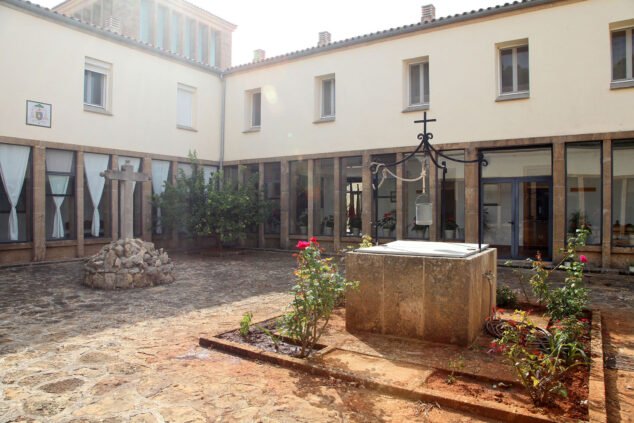 It is on the side of the road from Les Planes (el altiplano en el que the Montgo reaches the sea), right on the border with the term of Dénia, which marked the border of both municipalities. From the 80s, when this cross disappeared, until 2021, only the base remained of it, in three circular steps, and the base of the shaft. With these remains, located in its origin, it is known that it was a rough carved stone cross and from there, with the consultation of old photographs, the design of the last cross that marked this border is reproduced, with a shield of the town as the main ornament. 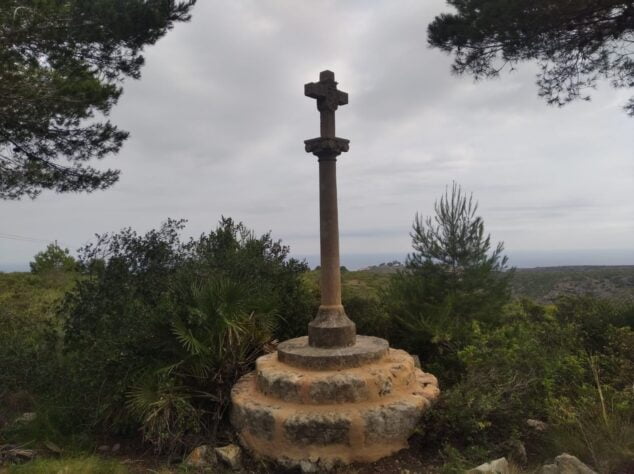 It is in the same area of ​​La Plana de Xàbia, in the Montgó natural park, but this cross is beyond the concept of "term cross" that we are talking about, because it is a commemorative monument of 1936, about a tragic event that occurred in that place.