Compromís expressed, during the course of the July ordinary plenary session, his concern about the state of the minister cove and for the unlicensed fencing that has been done in the chalet. The Valencian mayor, Vicent Colomer, claimed greater control over the actions carried out as well as cleaning and maintenance of the cove.

So Colomer warned that "The situation of the walkway is totally precarious, in addition to the structure of the chalet itself, which is underpinned and makes it a very dangerous area due to the possible arrival of another storm in autumn". To what he added "It is shameful that Costas has so abandoned. The City Council must urge this administration to act before we have to regret a disgrace ”. 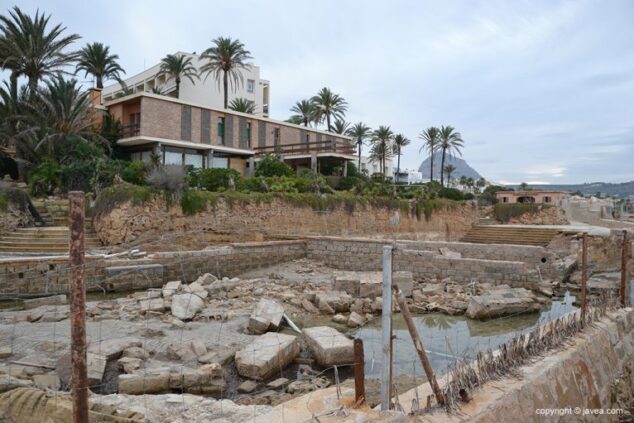 In addition, in coordination with the senator of this formation, Carles Mulet, they have presented a series of questions to the Government about the need to carry out actions in this space for the adaptation and preservation of the cultural and environmental heritage of the Queen's Banys. In this way, the Valencian formation has
manifested its disagreement with the current concession and proposes the renaturation of the area with the aim of preserving the original state of the cove to highlight the archaeological remains present there.

Senator Mulet has transmitted that “We must put an end to the privileges inherited from the dictatorship and that happens by ending the concession that the Rajoy government extended. If the PSOE-UP government truly believes in repair and historical memory, we must return these lands to the Javea Town Hall and to the citizens ”.

In the words of its spokesperson, Juan Cardona, “We do not understand that the concession continues, since the house is uninhabited and in a dilapidated situation. For this reason, we believe that it is better to return that space to citizens. ”

Unanimity in Xàbia for maintaining the traditional fishing of the 'tresmall'
August 28st, 2020
3 Comments