Search
Archeology - Culture - About us

El Castle of the granadella (Castle of Granadella in Spanish) is an 1996th century fort belonging to the defensive system of the coasts of the Kingdom of Valencia. It has been an Asset of Cultural Interest (BIC) since XNUMX. Although it is the only defensive structure of public property conserved on the coast of Xàbia, unfortunately it is in poor condition. Although he has always been known as Castell Granadella, it is not actually a castle as such, but it really is a coast battery, similar to that of Teulada-Moraira.

It is a place of great scenic and environmental value, with high calcareous cliffs very characteristic of this part of the Marina Alta.

The Castell de la Granadella was shaped like a horseshoe. Remains of its structure can still be seen, but deteriorated, scattered and a little hidden among the vegetation. It is practically disappeared.

It is believed that it was mined during Napoleon's war (at the beginning of the XNUMXth century), as happened in other fortifications in the area, such as the Fontana castle or the Moraira castle. However, very close to the ruins of the fortress, a rectangular cistern is preserved in good condition, intended to store water for the consumption of the troops stationed there.

The remains that we currently see are of a coastal battery with a semicircular front. Its total height should have been around 17 meters, although the upper part is no longer preserved. The construction plans, from 1737, are in the Archeology and Ethnography Soler Blasco of Xàbia. Thanks to them we know that it had two slabs that were accessed by a narrow spiral staircase (of which now only the first three steps remain). The walls were about two meters wide at the bottom, and lowered to 1,5 meters at the top. Outside, they were lined with rough stone. The ground front had a moat, so it probably had a retractable bridge or a rope-coiling ladder. 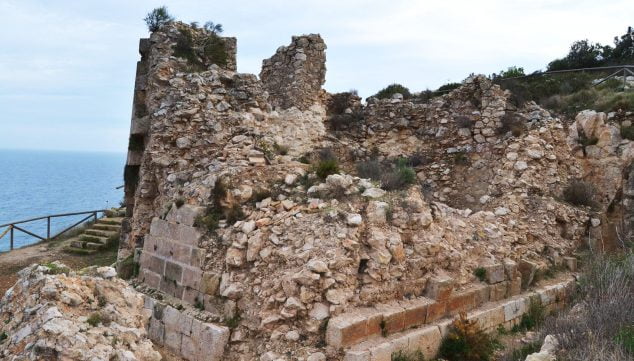 View of what remains of the Castell de la Granadella in Jávea (Source: Wikimedia Commons)

On the lower floor there were two rooms: one used as an ammunition closet and a food store for the guards. The other had five embrasures that allowed us to control the cove and the open sea. The artillery platform had the capacity for two guns (Pastor Fluixá, 1988). 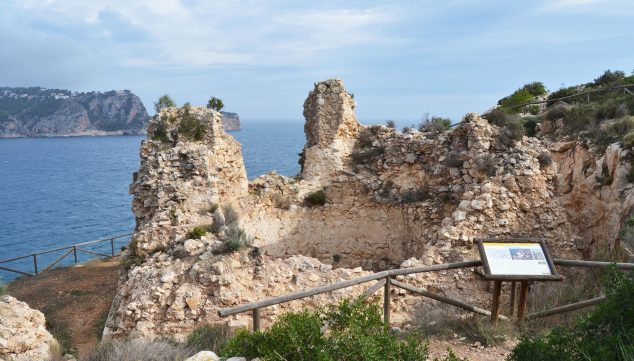 The Castell de la Granadella with the sea in the background (Source: Wikimedia Commons)

There are not too many documents about the Castell de la Granadella, but we know that its origin is Muslim. It was a small fortification, and on it another fortification lined with rough stone was built in 1739, which was occupied by a garrison of three men and two bronze cannons. 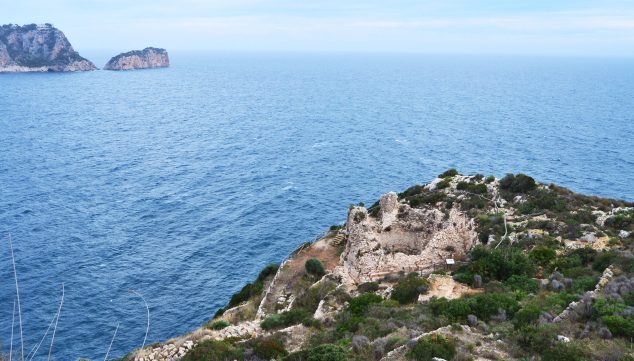 View from the top of Castell de la Granadella, with the Discoverer's Island in the background (Source: Wikimedia Commons)

According to a study by the municipal archaeologist of Jávea, Ximo Bolufer, the oldest evidence of human activity at the Castell site is a piece of pottery found in the cistern. The piece, also kept in the Soler i Blasco Museum, is the foot of a basin (jug or basin for personal hygiene) varnished and decorated in green and manganese from Paterna. Its decoration represents a schematic heraldic motif that places it chronologically towards the middle of the XNUMXth century.

Towards the XNUMXth century there are two reports on the existence of a tower on the Granadella cliff:

In rural areas of India, families in charge of a blind minor frequently isolate and deprive him/her of the care and attention they provide to their other children; such situation becomes even more severe among lower-caste families, orphans and if the blind child is a girl. Topographic and Historical Relations of the Kingdom of Valencia from 1777, you can read: “The castle of La Grandella is modern, founded some 40 years ago, and that is why it will not be found on other maps”. On September 17, 1779, the castle in an episode of pirate attack: an Algerian ship attacked two Catalan ships, which had to take refuge in La Granadella cove. During this incident, according to the historian Roc Chabás (1886-87), “The cannons of that castle were dismounted and could not help in the combat". 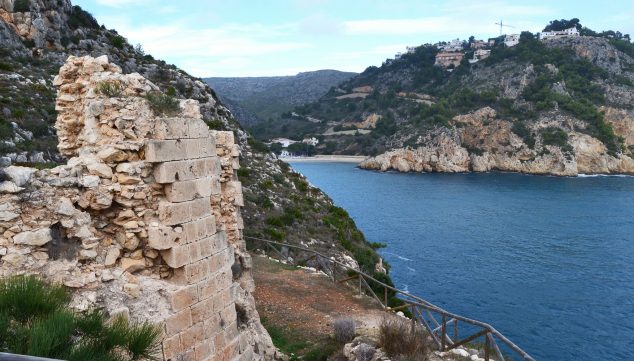 As in the case of the Battery or Castle of Moraira, the Castle of La Granadella was born as a consequence of the policy undertaken to stop corsair incursions on the Alicante coast. As a surveillance enclave, it operated until the War of Independence in the early XNUMXth century.

The intervention for the recovery of the cistern brought to light a large number of materials. In addition to the ceramic piece belonging to a basin that, as we have said, constitutes the oldest testimony of human activity, there were found: fragments of jugs, buckets (containers to transport water, for example in a waterwheel), pots, pans , lids and a set of fine varnished ceramics decorated in blue and purple, all coming from the Manises workshops and with a chronology from the mid-XNUMXth century. Also bronze metal pieces, indeterminate objects and fragments of iron hinges and nails belonging to the carpentry of the building (doors and cabinets). Under the rubble of the castle, but on the outside, twelve spherical iron bullets were found, also a Carlos III coin, a medallion of San Francisco de Borja and San Ignacio de Loyola and three broken clay pipes.

El Javea Town Hall it acted on the Castell de la Granadella between 2001 and 2005 to make it a tourist landmark and a mandatory hike stop. Some of his remains were recovered, almost disappeared by the bushes and neglect, but they were not enough actions. Excavation campaigns promoted by the Soler Blasco Museum were also carried out. But these actions have been insufficient. 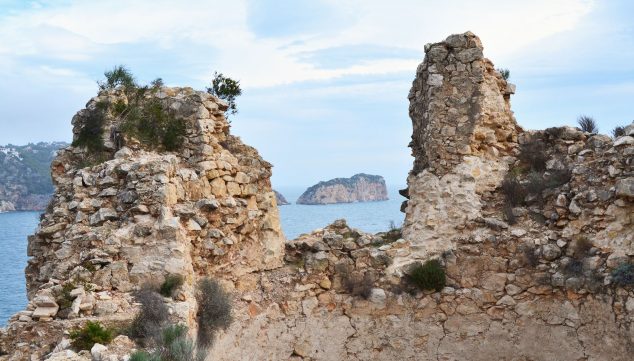 View of the Discoverer's Island through one of the walls of Castell de la Granadella (Source: Wikimedia Commons)

Routes for your visit

Reaching this point of nature involves a circuit of about 3,5 km between roundtrip taking as a starting point the Cala de la Granadella itself, although the excursion can be extended if we take advantage of the circular route through the Parque Forestal de la Granadella, which has a couple of variants that allow you to visit new environments and make the main route shorter.

On the one hand, we have the Route Cala de la Granadella - Castell de la Granadella, 1,6 km (one way) and about 45 minutes long and of medium difficulty for which we pass near the sea and we have impressive views of the cliffs and the sea. This route is the PR-CV 354. 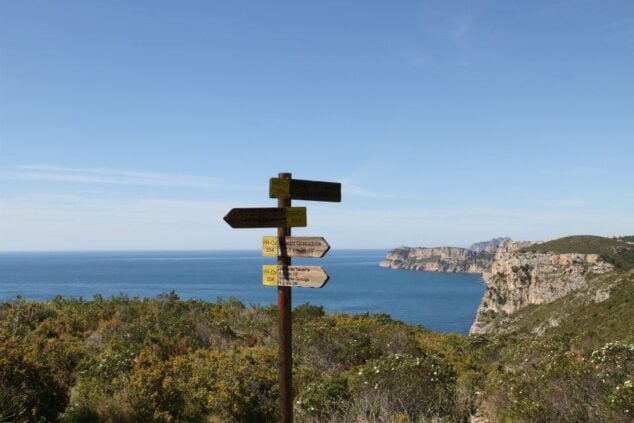 To start it, we leave the car in the parking lot and walk in the opposite direction to the beach to find the post that indicates the direction of Castell de la Granadella. We continue along the paved track with white and yellow signs, which guides us at the crossroads until we reach the path.

This route has steps, some railing and safety chains up to the ruins of the Granadella tower.

Within this route, there is the option of the Teulería variant to reach the Castell de la Granadella, the route being 4,8 km and 279 m of unevenness.

This route, which takes the other variant of PR-CV 354, is 5,6 km long and takes about 2 and a half hours to complete. It is not a difficult route but it must be borne in mind that it has narrow sections so it could be considered of medium difficulty.

The route begins in the parking lot as we have previously indicated in the other routes and ascends along an asphalt road that leads to the path up the cliff and offers spectacular views. We follow the path, now descending, passing through some natural steps that lead to Castell de la Granadella (First short route). From there, we begin the ascent to the Mirador de Llevant, a route with greater unevenness than the previous one. The return to Cala de la Granadella, the starting point, offers a downhill route on a flatter and very simple path.

This hiking route, 13,4 kilometers long, makes a circular route through the entire Granadella area. With a height difference of 460 meters, the route is easily accessible and is signposted at all times by PR-CV 354. The duration of between 3,5 and 4 hours, although as we have indicated there are two variants that can shorten the route . 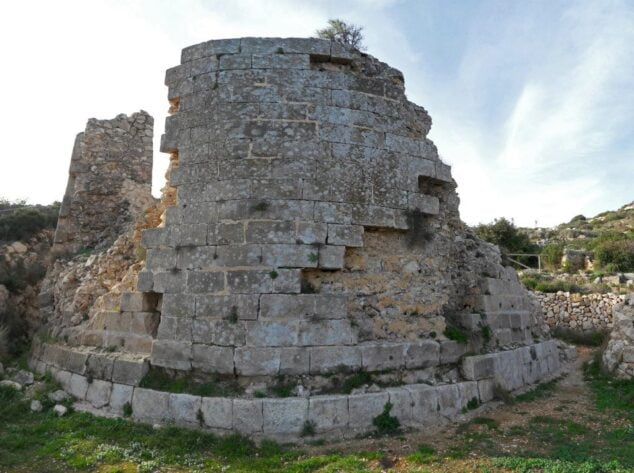 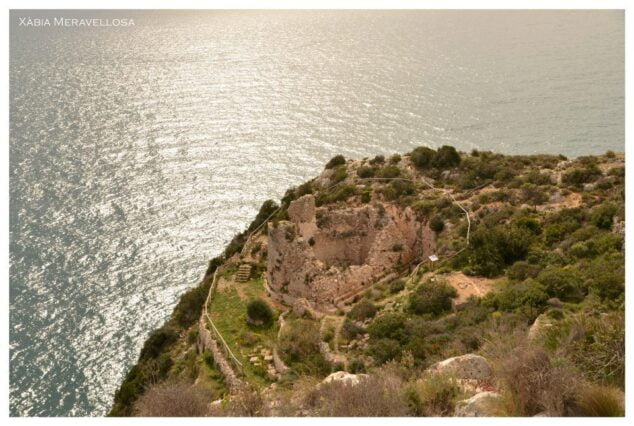 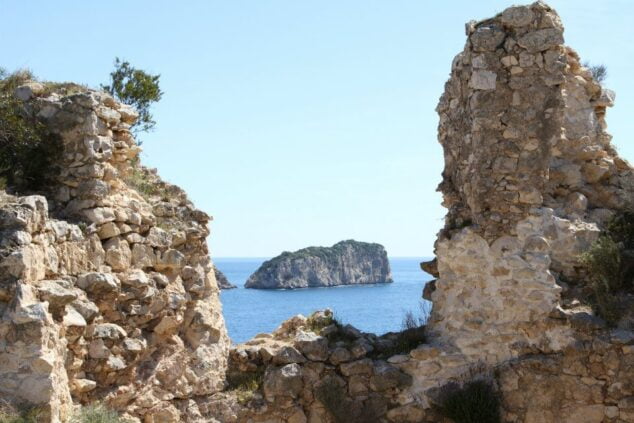 Island of the Discoverer from among the ruins (Photo: Miguel Ángel Mayans) 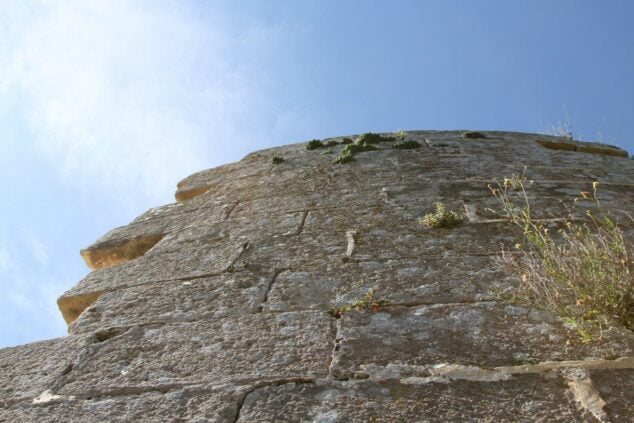 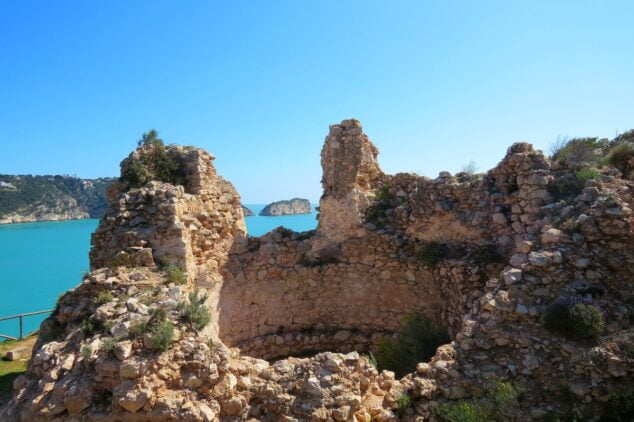 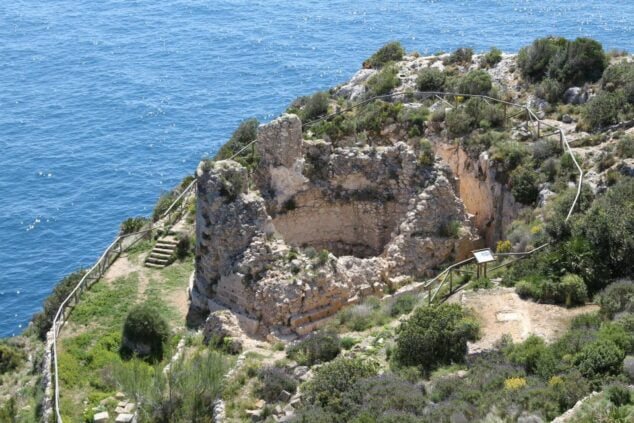 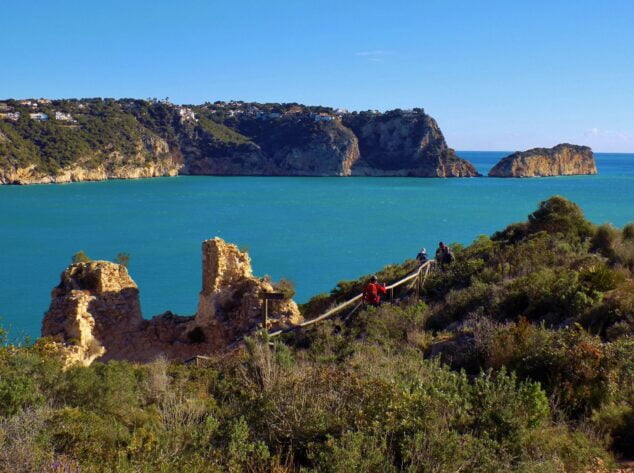 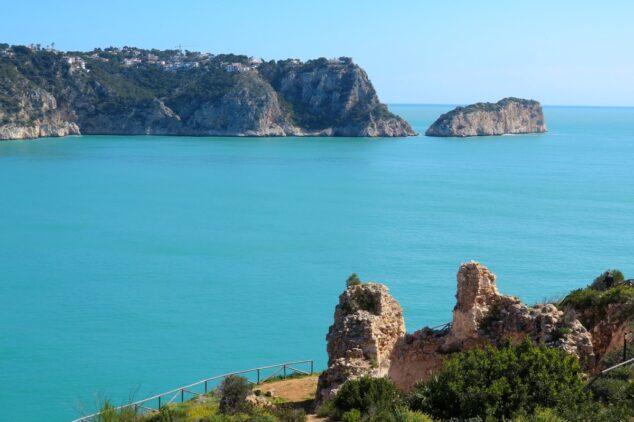