Álvarito misses the accident against Racing Rafelcofer due to injury

El CD Jávea, after his brilliant triumph against CD Dénia, he has to face Racing Rafelcofer. This clash will take place, this Sunday, in the municipal field of Xàbia, at 18: 30 hours and will be arbitrated by the collegiate, Alba Félix Egea.

The week has been quiet but marked by the closure of sports facilities for two days, which caused the team to have to find another place to train. The staff has gone through the gym to work and prepare this shock.

The most important thing is that Alvarito's withdrawal is confirmed, the Benissa player retired with physical problems from the field Diego Mena of those who have not just recovered. 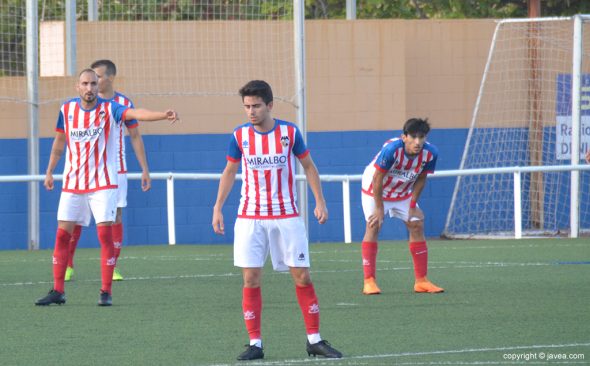 Defending CD Jávea in a match

The coaching staff, headed by Juan Carlos Signes, is clear that he does not want to risk and prefers to leave the player out of the call.

This season, the squad is long, so this absence does not mean too much trouble for coaches. Signes has several options to cover that loss, one of them giving Renzo entrance, so it would be a natural change from one man to another for another. The other option is for Panucci to play in band and Guerrero and Álvaro as the most advanced players.

The coach of the rojiblancos has described the game as a trap by commenting that “We have the poster of favorites and we know that. I hope we have the patience necessary to break your defensive system. Surely they will come to lock themselves in their area and look for some way out of the backlash, we have to be aware of that. ”

The hobby is expected to respond and that the grandstand of the field records a great entry, more taking into account that the team comes from winning in the field of its maximum rival.