I dedicate this article to Fina Doménech, a teacher who cultivates poetry like this XNUMXth century poet from Javi who gave name to the carrer En Forn for a few years, not long ago and who has helped me rethink a poem by Fray Cristóbal Bas. Also to Encarna Martínez Oliveras who builds sonnets so that Vicente López-Ibor can break them creating a new poem.

It happens that in the publication of Les Fogueres in 1965 I wrote a text entitled 'Glorias javienses' where I dedicated a paragraph to Fray Cristóbal Bas. Later Manuel Bas Carbonell in Xabiga (nº 3, 1987) as well as Francesc Reus i Boyd-Swan in 2011 in Festes patronals Mare de Déu de Loreto, published two separate works on the figure of this mercedarian who lived in the XNUMXth century. 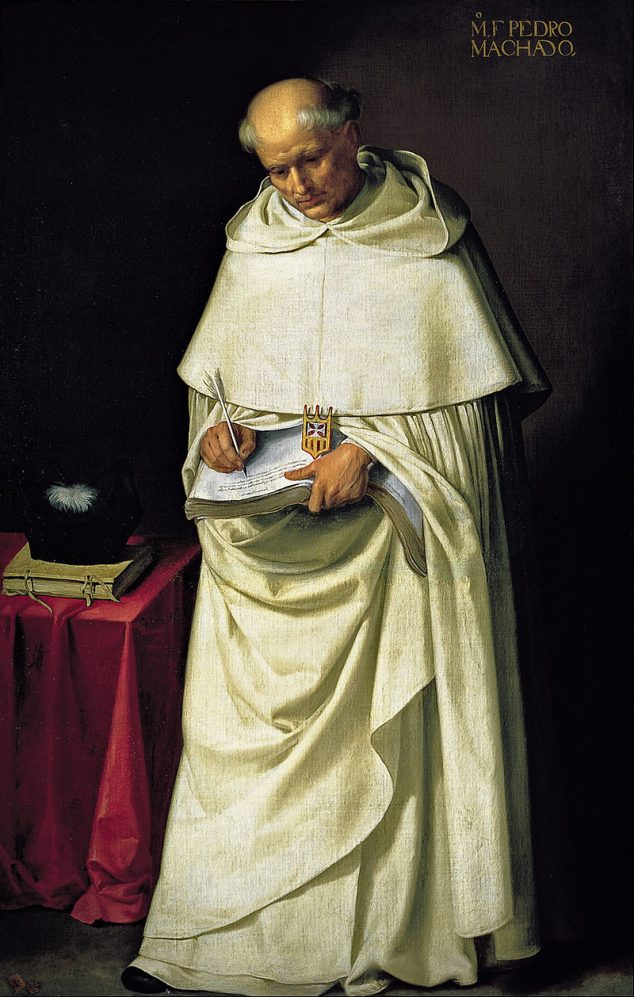 But now I add something else.

We said in the previous collaboration that Fray Cristóbal Bas participated in the third matter in which María resembled a sundial that at one has no shadow. Three prizes were announced for the participants: a silver watch for the first prize, a ring for the index finger destined for the second prize and for the third prize amber gloves, well, Fray Cristóbal Bas received the ring for the index finger which was awarded
for reaching the second prize.

The award-winning poetry of Fray Cristóbal that was deserving of the second prize of the third subject began with this gloss:

Gloss
To define, pure watch,
Your first point intact,
I'll be there on time;
Well, the room requests it.

Throughout his life trajectory and as an accomplished and elegant poet who seeks new ways of making poetry and departing from the usual canons, he carries out an exercise in exquisite and unusual elaboration, which must have had followers at least in vates from Zacatecas (Mexico) than in 1727 gave the printing press those poems that comprise three as a game that ended up being trivialized.

Well, Fray Cristóbal Bas, in Sacro Monte Parnaso from 1687 presents a romance-labyrinth entitled 'Poetry comprising three' and which is presented in three columns. The first column has 3 syllables, the second 2 and the third 6 or 7. The reading can be done in three ways. 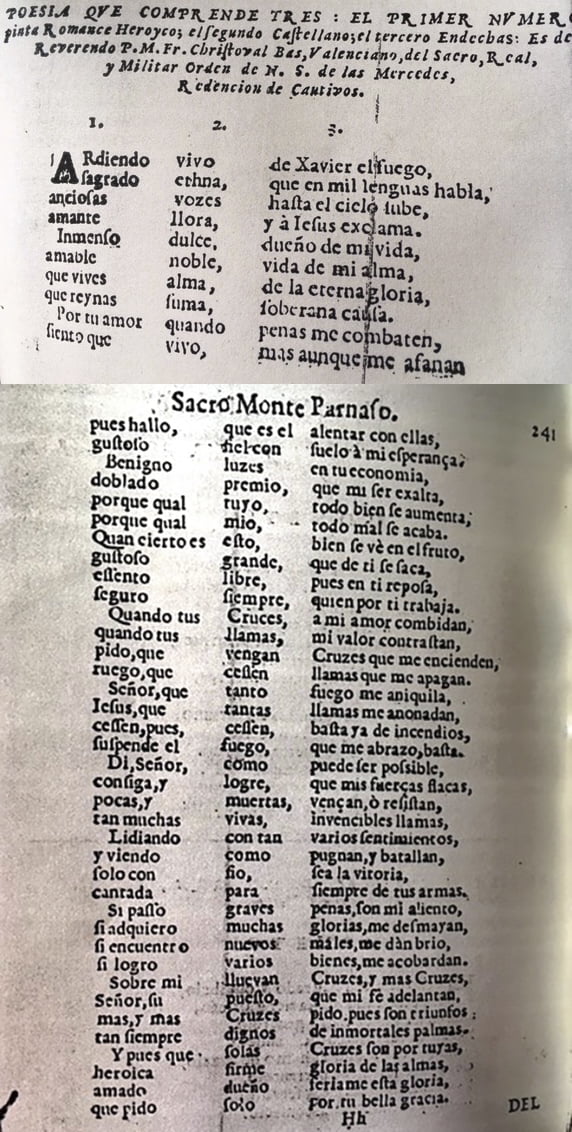 If each line of the three columns is read we present it as a heroic romance of 11 or 12 syllables, where the words of the first and second columns form the first hemistiquy of the romance and the third column the second hemistiquy. They total 11 syllables or more.

To read the text that is inserted, it should be noted that the letter 'f' must almost always be pronounced as 's'.

We believe that the Xavier that appears in the first verse refers to Saint Francis Xavier with whom Fray Cristóbal Bas found an example of a missionary in the East and to whom he dedicated some other composition, as we will see later. We must note that Fray Cristóbal died in Oran and that the Mercedarians had the special mission of the redemption of captives, they had to go barefoot and practice retirement, poverty and abstinence as an austere order.

The fame of this religious transcended in time and in 1772 we found a tenth in the curious, historical, erudite, commercial, civil and economic newspaper. From the research that we have carried out in this Curious Diary, it has led us to meet the author of a sonnet that until now has been either considered anonymous or attributed to other poets. 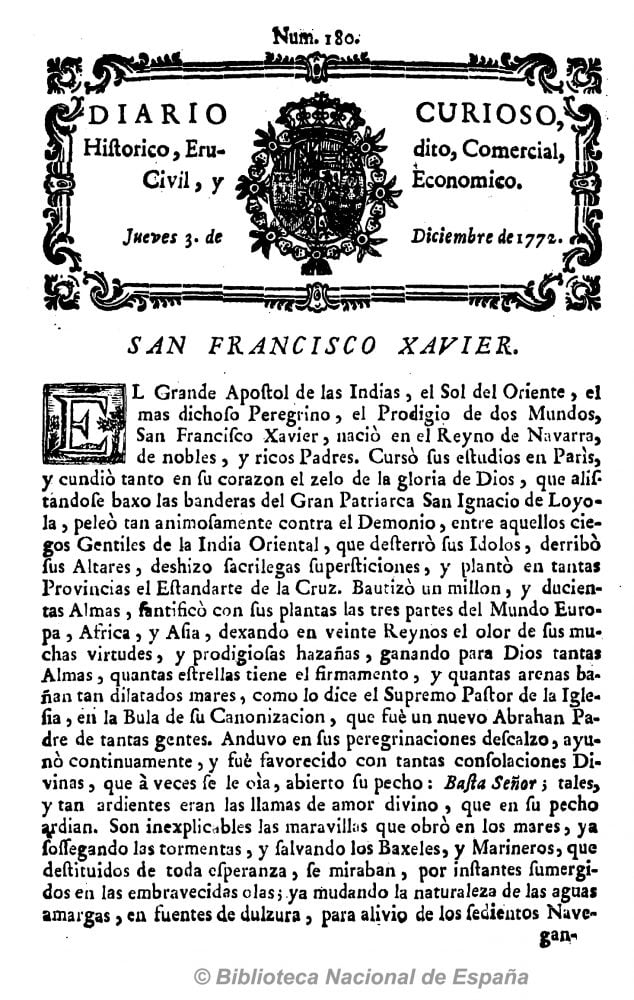 In the diary of December 3, 1772, a brief biography of Saint Francis Xavier is made and it is emphasized that the most amazing of all his virtues was that of applying the mouth and sucking the sores to a poor patient of the Hospital of Venice, and he did it to overcome disgust and to overcome himself. Well this fact was the text of a gloss:

The value of the Saint is such
He swallows sick disgust,
And so it sucks every sore
As if it were a honeycomb.

The diarist tells that this fact had been glossed in Tenths by thirteen mills and that for thirteen newspapers he would go on to transcribe the mentioned tenths, the first being the same day and the one that took the tenth place was that of Fray Cristóbal Bas, who published the December 15, 1772. But the incredible fact is that after the last tenth the diarist writes: “I found it useful to end his praise by giving the public that act of Contrition that the same saint (Saint Francis Xavier) composed.

This is the sonnet 'Don't move me, my God, to love you', with which he attributes the authorship of this sonnet to Saint Francis Xavier when that attribution has been much discussed. 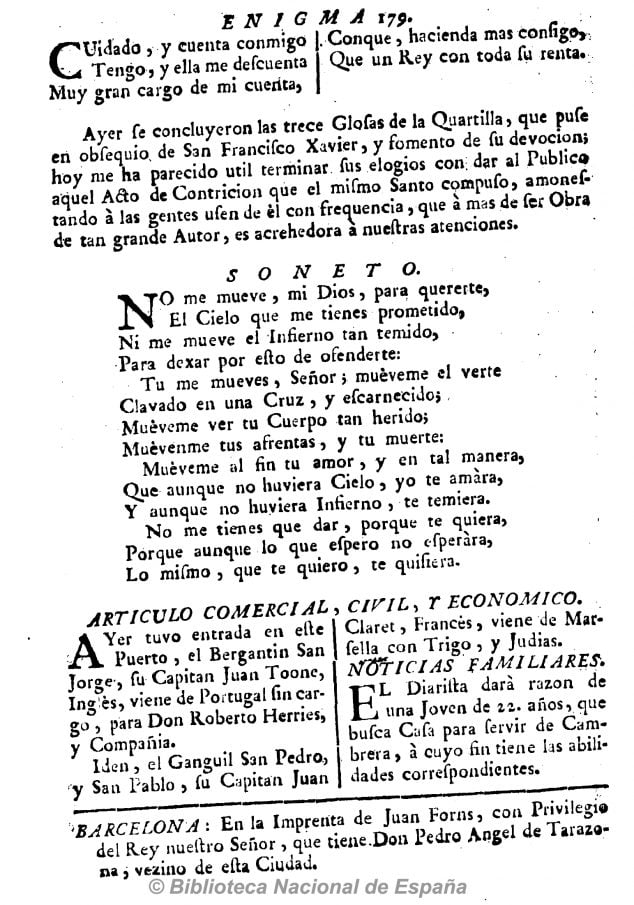 This sonnet appeared in Madrid in 1628, in the book 'Life of the Spirit', by Antonio de Rojas and it appears as a model text in the lyrical anthologies since Marcelino Menéndez Pelayo included it in his anthology of The One Hundred Best Poems of the Spanish Language. This sonnet has been attributed to Juan de Ávila, to the Augustinian Miguel de Guevara. The authorship of Santa Teresa de Jesús and even Lope de Vaga or San Juan de la Cruz and also San Ignacio de Loyola and San Francisco Javier have been discussed, but these two are dismissed since there is no estimated poetic work of these two authors.

And yet in this Curious Diary it is said that San Francisco Javier composed it. In the sonnet one can appreciate the love that is born clean and deep from the painful contemplation of the martyrdom with which Christ rescues man and in the two thirds the love for Christ is reinforced above any other consideration.

We do not know the arguments that the diarist would have in 1772 to carry out such news, nor its sources, but from the hand of Fray Cristóbal Bas we have known this attribution.